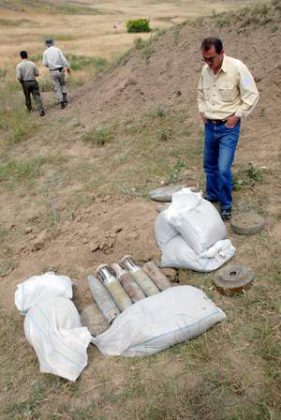 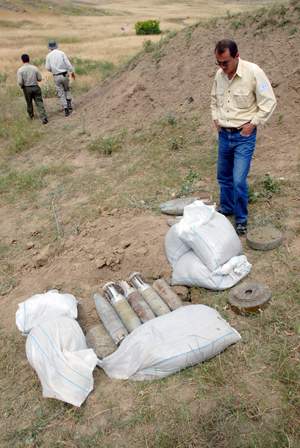 AMARAS, Armenia // In a picturesque mulberry orchard, two men pick up a white plastic frame and slowly walk forward through the long grass.

As they edge ahead, a colleague behind plants red stakes in the ground to mark the area the pair has covered.

Then, as they move a few more feet, a shrill alarm sounds: something underground needs investigating.

It could be an anti-tank mine of the kind that have killed a string of residents and white stakes are planted in the soil to indicate where further tests are needed.

This is all in a day?s work for the Halo Trust, a British charity that has been helping to clear Nagorno-Karabakh of mines and unexploded ordnance for nearly a decade.

The risks posed to local people from the remnants of the conflict with Azerbaijan that ended 15 years ago are not in doubt. The self-declared independent state has seen, since 1995, 73 civilian deaths from unexploded material, plus more than 250 injuries, many to children.

In total, 30 square kilometres of mostly former agricultural land were contaminated with Soviet-made anti-tank and anti-personnel mines laid by both sides.

Cluster munitions from Azerbaijani aeroplanes that left unexploded bomblets also pose dangers, especially to children who think they are toys, while shells and other weaponry are an additional threat. About 180 sq km were contaminated with these types of material.

?In Stepanakert [the capital], people might not wake up in the morning and think there?s a problem, but in the villages people come across unexploded ordnance on a daily basis,? said Yuri Shahramanyan, Halo?s Nagorno-Karabakh operations officer.

?Unfortunately, there are still accidents happening. One [in April this year] was in an area that was mined and where there were signs warning about the mines. People just ignored them and a tractor blew up on an anti-tank mine.?

In the same month, a man died when he accidentally triggered an anti-tank mine while digging. A month later, two people were hurt in an explosion as they collected poles from an abandoned vineyard.

Clearing an area of anti-tank mines is a fairly relaxed process since the devices are not triggered by a person walking above them.

Typically, two men carry a two metre by one metre large loop metal detector that detects material up to one metre below ground.

With anti-personnel mines, the work is more stressful ? staff have to wear protective gear and edge forward much more slowly.

It is important, said Mr Shahramanyan, to know who laid mines in a given area, since the two sides had different mine-laying patterns, and these determine the best strategy.

Halo tries to spread the message that people finding material should not dismantle it themselves, although as many people in Nagorno-Karabakh are ex-military, a lot try to do just that.

Each month in an isolated hillside in the east of the enclave, the trust holds a controlled explosion of collected material. Anything with a fuse is destroyed where it is found, but the likes of mines and tank projectiles can often be picked up and dealt with en masse.

At the detonation site, the material is covered with sandbags while scouts check no one is nearby. A man in a sheltered hut 300m away then sets off the explosion.

So far, about 400 minefields have been declared safe, with less than half this number remaining to be cleared. Prime agricultural land is prioritised when it comes to mine clearance.

Funding in Nagorno-Karabakh comes from the governments of the UK, the US and the Netherlands, and the Julia Burke foundation, a California-based charitable organisation.

Mr Shahramanyan said the trust, which also operates in places such as Angola, Afghanistan and Sri Lanka, was keen to secure donations from the Armenian diaspora for its work in Nagorno-Karabakh, where it is the only mine clearance organisation.

Halo, which also worked with the de facto local authorities in Nagorno-Karabakh in 1995 and 1996, now employs 260 staff there.

There are many clearance teams operating across the enclave and the trust has had six accidents itself, although none was fatal.

If funding remains adequate, Mr Shahramanyan estimates it will take five years to clear the enclave of mines, and another year to rid it of unexploded ordnance.

A short walk from the mulberry grove Halo recently cleared, the results of mine explosions are all too apparent. Kolya Kocharyan, who looks after Amaras Monastery, walks with a limp and cannot straighten his left arm because he blew up an anti-tank mine while driving a tractor in 2000.

It was the fourth time since the end of the conflict that he had unintentionally detonated material and this time his injuries were bad enough to stop him working.

?It?s so important,? he said of the mine-clearance work. ?It?s one of the priorities of Karabakh.?

Photo: Unexploded ordnance has been recovered from the fields around Nagorno-Karabakh. Onnik Krikorian for The National