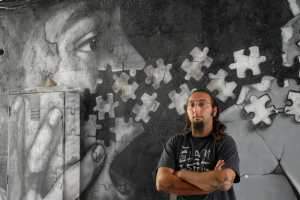 YEREVAN // Charles Masraff does not mince his words when he describes what he wants to achieve in Armenia.

The 59-year-old restaurateur says he was attracted to the country ?by the possibility of giving Armenia a future?.

Although he was born and brought up in London, Mr Masraff?s paternal grandparents came from what used to be Western Armenia, and is now eastern Turkey.

He is one of what is thought to be a growing band of western-raised diasporan Armenians moving to their ancestral home country.

In the decade after it became independent in 1991, Armenia lost as much as one-fifth of its population as the economy declined in the early 1990s, with most emigrants going to Russia.

Since the mid-1990s, the economy showed strong annual growth until the recent financial crisis, and the parallel modernisation has attracted many of Armenia?s huge diaspora, which is over twice the size of the country?s 3.2 million population, to live in the country for the first time.

While Armenia has achieved significant economic growth, Mr Masraff believes the country remains stifled by a culture of corruption, which he describes as ?a way of life here?.

?Armenia desperately needs people with outside experience,? he said. ?There?s a culture among Armenians living in Armenia that makes progress difficult ? corruption, the sense that the present is all there is.

?But if you look at the Armenian diaspora and the success they?ve enjoyed in different societies, compared to the inability of this society to achieve very much ? why did we get this huge contrast? The post-Soviet hangover has a lot to answer for.?

Mr Masraff spent most of his career in Scotland in hotel management, but for the past three months has been running a restaurant in Yerevan.
?I came here to try to achieve something,? he said. ?I?m not just an observer. By running a business, I feel I have a greater chance to achieve something.?

Among the analysts who believe a growing number of diasporan Armenians are moving to Armenia is Arpi Vartanian, country director for the Armenia and Nagorno-Karabakh offices of the Armenian Assembly of America, a lobbying group.

Born and raised in Detroit to two diasporan Armenians, including an Iranian-Armenian father, Ms Vartanian moved to Yerevan in 1993.

?I?ve seen families come and go, I?ve seen people get frustrated they weren?t able to succeed but I see more and more people coming or expressing the desire to come. They want to live in their homeland,? she said of the ?repatriates? moving to the country.

?That?s not to say everyone is coming with rose-tinted glasses. They?re coming with the hope that Armenia will change them, but [also] that they can use their experience or knowledge to change Armenia.

?Every encounter impacts people. I?ve had people say: ?You?ve taught me.? They told me later they watched how I worked and my work ethic and that taught them. They were able to use that later.?

For diasporans brought up in the West, Ms Vartanian said Armenia was now a much easier place to live than when she arrived, when there were few cafes or nightclubs.

?There are still some things I miss and crave,? she said. ?It drives me nuts when people don?t stand in line. But people have been so open and interested in who I am.?

Rudolf, a 27-year-old born in Bahrain and brought up in France, London and Lebanon, and who declined to give his full name, admitted however that diasporan Armenians often tended to socialise with their own kind rather than locals.

?My friends are diasporan friends from Syria, Beirut, the United States,? said Rudolf, who has a ?pagan Armenian metal? rock band and has lived in Armenia for the past 18 months.

Even if his social circle is largely made up of fellow diasporans, he hopes he can effect change.

?We?re coming here to do something good,? he said. ?We have done stuff that there wasn?t here five or six years ago ? the first rock band in the Caucasus. We come with new ideas. We?re trying to relate it more to Europe. I?m against the Soviet mentality. I think it?s ruined the country.?

His friend, Zak Valladian, born and brought up in Dubai, is a member of a group called Tebi Hayrenik or ?back to the motherland? that encourages diasporans to relocate to Armenia. He believes ?absolutely? more of them are doing what he did four months ago, and moving to the country.

?Change comes from within,? said the 30-year-old, who runs a special effects business. ?I do believe for Armenia?s sake, the only thing they can do is to encourage the diaspora to come and invest. It?s home from home for us.?

Photo: Zak Valladian is one of the foreign-born Armenians returning to the country of their heritage. Onnik Krikorian / The National

Zak Valladian has been our community member in the UAE before he repatriated in 2008. As a young kid he as attended the weekly Armenian School of Sharjah.

Tebi Hayrenik is a movement that has started in Dubai, with the aim of facilitating the repatriation of Armenians to the land of their ancestors. It has so far organized 2 pilgrimages to Armenia during Genocide commemoration days.