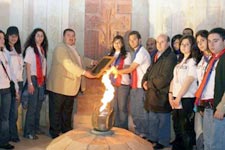 On 21st of April, 2007, Mesrobian High School, along with other Lebanese-Armenian Schools participated in the Pilgrimage to Der Zor, a program devoted to the Armenian Genocide.

They also placed a monument, made of douf stones, by Dikran Kalousdian, in the memory of the one and a half million Armenian Martyrs.

On their way back to Beirut, the students brought with them some human bone remains of the martyrs. These remains, on 24th of April 2007, in St. Gregory the Illuminator Church, were placed on the Altar and were blessed by the hands of His Beatitude Nerses Bedros XIX, Catholicos Patriarch of Cilicia of the Armenian Catholics, during the Holy Mass.

After that, our students participated in the march, which was held for this occasion. They placed a flower ornaments on the Genocide monument in the court of the Armenian Catholic Patriarchate. On the same monument, the remains brought by Mesrobian students, were also placed.

On the 25th of April, in the morning, students of Mesrobian Kindergarten, went to the Armenian Catholic Patriarchate and placed each a flower on the Genocide monument. After that, they all prayed the Lord's Prayer, along with Msgr. Vartan Ashkarian and Mr. Gregoire Kaloust.