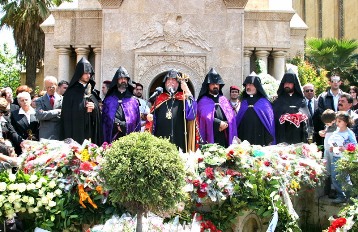 Catholicos Aram particularly emphasized that ?the denial of truth will generate more evil; the negation of a crime committed against a nation will pave the way to new genocides. The truth must be accepted and the crime must be recognized, not only by the international community, but also by those whose fathers and forefathers committed this crime against humanity?.

His Holiness went to say that ?although Turkey currently presents itself as a civilized country with a concern for human and cultural rights, the evidence shows otherwise, as in the assassination of human-rights advocate Hrant Dink and the transformation of the centuries-old Armenian church of Akhtamar into a museum?.

His Holiness emphasized the crucial importance of compensation. He said: ?We are a peace-loving nation. But real peace is based on justice. Our people are demanding justice for a crime committed against its fathers and forefathers; and I am the spiritual head of the survivors of those Armenians who were the victims of this horrible genocide. We cannot remain silent in view of the prevailing silence over this crime. Compensation must be made to the victims. We are not looking for punitive justice, but for retributive justice, a justice that brings about recognition, confession, and compensation, and only then reconciliation?. ?Cheep reconciliation will never establish justice?, affirmed His Holiness Aram I.

Thousands of Armenians attended the church services at the Cathedral here in Antelias, Lebanon, the headquarters of the Armenian Catholicosate of Cilicia.

ANTELIAS, Lebanon – The Saint Mary?s Monastery in Bikfaya was flooded with the Armenian youth on the evening of Monday April 23, the eve of the Armenian Genocide commemoration day. Primate of the Diocese of Lebanon, Bishop Kegham Khatcherian presided over the event organized by the joint committee on commemorating the Genocide. The members and supporters of all Lebanese-Armenian political organizations, sports? unions and youth movements gathered around the Armenian Genocide monument to pay their respect to the Genocide?s one and a half million victims.

The Seminary students participated in the event by carrying out the requiem service.

Vazken Jamgotchian delivered the opening remarks of the event saying that once more Armenians come to bow before the memory of their victims and reaffirm its pledge to remain loyal to their legacy. Jamgotchian underlined that Armenians should not wait for April 24 to pursue its cause and commemorate its martyrs. Rather, they should lead lives where national struggle, loyalty to national values and demanding accountability from Turkey are everyday concerns.

The main speaker of the event, Benjamin Betchakdjian, pointed out that events dedicated to the victims of the Genocide not only commemorate the memory of the martyrs, but remind everyone that the Armenian cause remains unresolved and the struggle for justice continues. He stressed that April 24 is also a day of contemplation to think about committed deeds, achievements and mistakes and to correct them.

A march from Antelias to Bikfaya by the members of the Armenian Revolutionary Federation?s Youth association preceded the event.

Photos:
– Aram I Catholicos presides the commemorative ceremony.
– Bikfaya gathering in the evening of 23rd April 2007, at the monument dedicated to the Genocide victims. 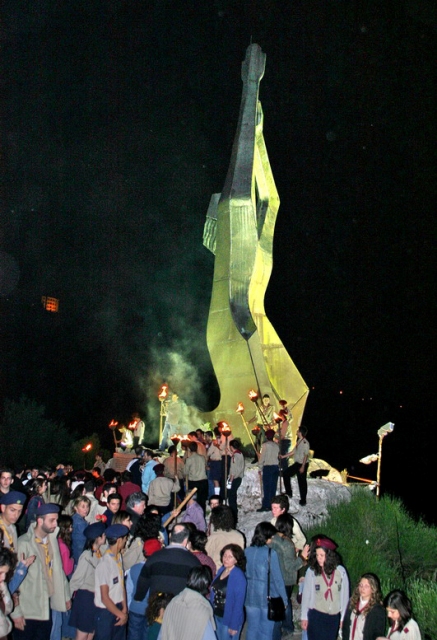