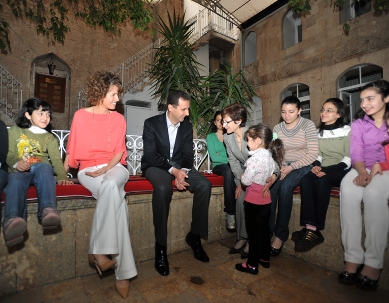 Syrian President Bashar Al Assad and his wife Asmaa visited on Sunday (12 April 2009) the Armenian Orphanage in the Al-Jdeida Quarter in the old part of Aleppo, on the occasion of Easter.

Al Assad conversed with the people in charge of the Orphanage and had a friendly talk with the children about their daily life, school duties and other issues of concern.

The Armenian orphanage of Aleppo was founded in 1919. Its first mission was to provide a warm corner to the children who ended up there after losing their parents and relatives during the horrors of the Genocide.

In 1928 the Orphanage (also known as National Shelter / Azkayin Badesbaran) was given into the care of the Armenian Relief Society.

Currently there are some 30 children in the shelter, with ages ranging between 4 and 24 (the older ones only females). The Armenian Prelacy of Aleppo and the Surroundings (Periotem) provides for their needs.

The everyday life of the orphanage has been vividly described in a famous work by writer Antranig Dzarougian (1912-1989), translated into English by Elise Bayizian and Marzbed Margossian and published in 1985 in New York.

The autobiography “Men Without Childhood“, details the experiences of the author, who as a 3 year old child in 1915 was deported with his mother from the town of Gurun in central Turkey. With hundreds of other women, children, and elderly they marched through the Syrian desert, finally reaching Aleppo, where they found refuge. Dzarougian spent his early years in orphanages in Aleppo and Jebeil (Byblos, a town north of Beirut). His ordeal is the story of thousands of children who were orphaned overnight, and haunted forever by a bitter past.

Photos: Al Assad and wife Asmaa in a friendly chat with the children in the Armenian Shelter (Syrian Arab News Agency photo) 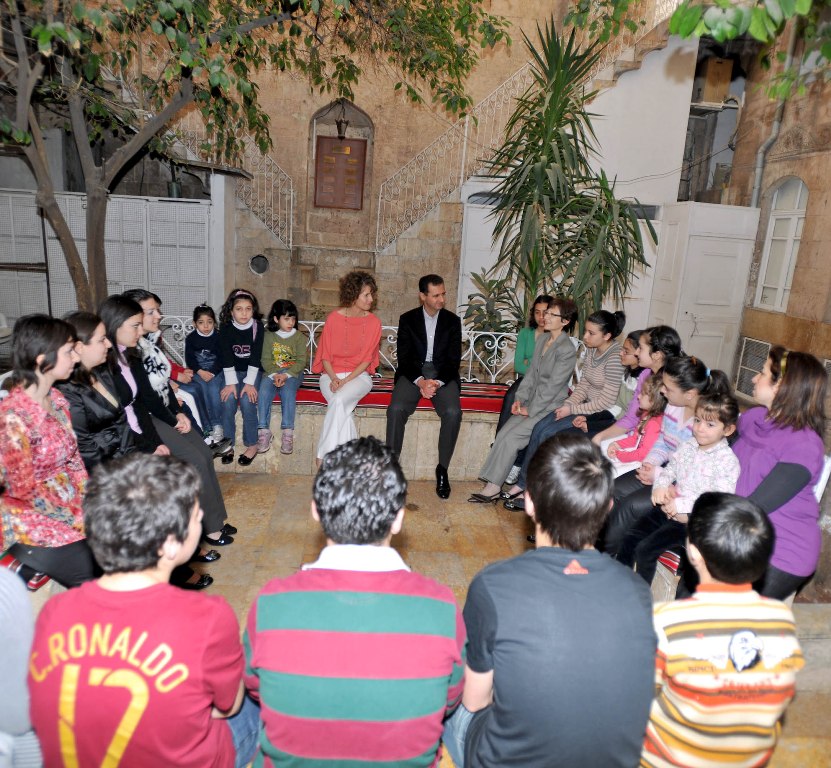 Newer PostSafe Easter celebrations for the first time in Baghdad since 2003
Older PostAntranig Hajibalian: 35 years service to the Armenian Church and community