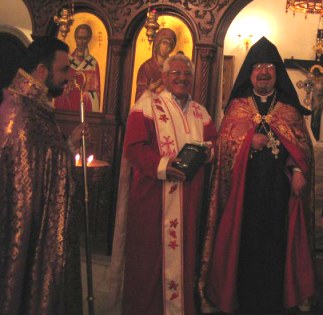 Friday 09 January 2009 was a day to remember in Abu Dhabi. The tiny Armenian Community in the captial of the United Arab Emirates, marked the 35th anniversary of Antranig Hajibalian's devotion to the community and church life.

The ceremony took place in the Saint Nicholas Greek Orthodox Church in Abu Dhabi, in the presence of more than 70 persons.

Father Aram Deyirmendjian, the parish priest of the UAE Armenians, read the letter of appreciation signed by Archbishop Goriun Babian. In his letter, the Catholicosal Vicar of Kuwait and Gulf countries, expressed his gratitude to Antranig Hajibalian, on behalf of the believers and the national authorities, for his role in keeping the Armenian religious and national traditions alive in Abu Dhabi and serving with devotion through many years. The Archbishop expressed his firm belief that Hajibalian will continue serving the Church. He praised his spirit of dedicatoin and voluntary work, considering him as a valued example for Diaspora Armenians (Copy of the letter in PDF format is available here).

The Armenian people of Abu Dhabi were delighted to see Hajibalian honored, since they have witnessed Antranig?s service throughout the past years.

Antranik started going to the church at an early age. He used to sing for the Armenian Vartanants Church Choir in Aleppo, Syria, starting from the age of 6. His father Garabed Hajibalian has always been a psalm-reader (tbir) at the Armenian Church Choir and his dream was to raise his children with a strong faith in God.
He encouraged all of his 7 children to attend Sunday classes and serve the Armenian Church at a very early age. Eventually, his dream came true when his two eldest sons, Kevork and Antranig became Deacons (Sargavaks).

Antranig was only 25 years old, when he first arrived in Abu Dhabi in 1975, few years after the independence of the United Arab Emirates (1971). From the first moment he was ready to serve the Church, but unfortunately there were no Armenian priests residing in the UAE at that time. Occasionally, a priest used to fly from Iran, Syria or Lebanon, to celebrate mass at the Saint Joseph Catholic church, the only church complex in the capital at that time, where all the nationalities used to pray. The Armenian mass used to take place only few times a year, usually on Easter day and on the Armenian Christmas (6th January). The number of the Armenians in Abu Dhabi in 1975 was less than 20. Now the figure stands at 500 and the Armenians are preparing to build a church on a land given by the local government.

In 1998, when the Armenian Church was constructed in Sharjah, a permanent priest was invited (Father Aram Deyirmendjian) to settle down in the UAE. Since then, Armenian mass is held in Abu Dhabi (in foreign church) once in every two weeks.

Antranig Hajibalian?s service in the Church goes back to 1975, almost 35 years. He was ordained as Senior Deacon (Avak Sargavak) at the Saint Hagop Armenian church in La Ciotat, Cote d?Azure, France in 1991. He is the owner of “Grand Syria” mechanical workshop in Musaffah, Abu Dhabi. He is married to Maral Assadourian and they have been blessed with one daughter and two sons.