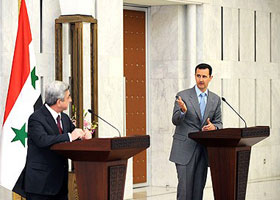 Armenian President Serzh Sargsyan paid an official visit to Syria on 22-24 March 2010, during which he met with Syrian President Bashar Al-Assad and other high ranking officials in Damascus, Aleppo and Deir ez Zor.

Sargsyan and Al-Assad held on Monday 22 March 2010 a session of talks on bilateral relations as well as on the latest regional and international developments. In a joint press conference following the talks, President Al-Assad described the visit of President Sargsyan as a “further pillar following my visit to Yerevan”, in bolstering of the Syrian-Armenian relations.

The two Presidents underlined the importance of reactivating the Syrian-Armenian Joint Committee.

“I have been briefed by President Sargsyan on the latest developments related to the conditions in Caucasus,'' added Al-Assad, reiterating necessity of work as to overcome all differences between Armenia and Turkey, resorting to dialogue as to continue the process of confidence building.

Al-Assad hailed President Sargsyan's decision to go forward towards relations with Turkey as “courageous” and “based on a far-sighted vision”. He renewed Syria's willingness to play a role in the finding of a “common grounds” as to construct normal Armenian-Turkish relations, in the interest of the region security and stability.

Mrs. Rita Sargsyan and Mrs. Asmaa Al-Assad visited on Monday 22 March 2010 the first specialized unit for the diagnosis and treatment of childhood cancer in Syria (BASMA) at Al-Baironi University Hospital in Damascus, which was inaugurated by Mr. Al-Assad in 2009. The unit is the first of its kind in the health sector in Syria.

Addressing the attendants, President Al-Assad stressed the importance of historical relations, human, social and cultural links that bring the Syrian and Armenian peoples together. “These links make potentials of cooperation and rapprochement between the two countries without limits. These potentials must be invested through opening new horizons to reach highest level of economic, trade and cultural cooperation,” he said.

“Syria and Armenia live in an important geopolitical region that big international interests meet and intertwined. This requires that the two countries cooperate and coordinate and agree on details and strategies,” he explained. “Dialogue and understanding among the countries of this region; recognition and respect of all countries interests is the best way to solve their problems and boost their position in the international arena,” he said.

Referring to the Palestinian issue he said: “The only obstacle in the way of stability is the Israeli occupation, which continues the policy of killing, sieging, settlement building, demolition of Palestinian houses, Judaizing Jerusalem and rejecting all peace initiatives”.

President Sargsyan said that relations between the Syrian and Armenian peoples are unique and much more than a friendship between two peoples living in the same area, noting that Syrian-Armenian friendship has a history that had extended for thousands of years.

Sargsyan pointed out that the Armenians could integrate in the social life of this country keeping their identities.

Syria and Armenia sign 10 agreements and memos of understanding (MoU)


Also, an executive program for technical and scientific cooperation in agriculture for the years 2010 and 2012 was signed. The agreements were signed by Minister of Agriculture and Agrarian Reform Adel Safar, Minister of Higher Education Ghiyath Barakat, Minister of Industry Fouad Issa al-Jouni, Minister of Electricity Ahmad Qussai Kayyali, Minister of Justice Ahmad Younes, Minister of Interior Said Sammour, Director-General of the Remote Sensing General Establishment Osama Ammar and Chairman of the Executive Office of the General Sport Union Muaffaq Jomaa.

Syria has a unique position in the history of the Armenian people, President Serzh Sargsyan said on Tuesday 23 March 2010 in a lecture at Damascus University.

“Syria is very close to us, not only geographically but through friendship, similarity of destiny and the distinguished relations between the two peoples in addition to the several other links,” he said.

“Syria played a unique and an important role for Armenians. It was the bridge that had linked Armenians, Arabs and Moslems,” President Sargsyan pointed out. He mentioned that Christianity has reached Armenia through Syria. Also he referred to Saint Mesrob Mashdots the inventor of the Armenian Alphabet, who went to several Syrian scientific centers (including Edessa, present-day Urfa in Turkey) in the early fourth century in his efforts to invent the alphabet.

President Serzh Sargsyan and his wife visited on Tuesday 23 March 2010 the Umayyad Mosque in Damascus. Minister of Islamic Endowments Awkaf (religious affairs) Mohammad Abdusattar al-Sayyid and Minister of Presidential Affairs Mansour Azzam accompanied the Armenian president. The guests listened to an explanation about of the Mosque and its historical phases before touring it.

Syria and Armenia agreed on Tuesday 23 March 2010 to boost economic cooperation between the two countries. The agreement came during a meeting that brought together Armenian President Serzh Sargsyan and Prime Minister of Syria Mohammad Naji Otri. The two sides also agreed on increasing trade and boosting businessmen role to consolidate economic and investment partnership and the role of the two governments in exploring potentials for expanding these relations.

Earlier, in a visit to the Syrian People's Assembly, President Sargsyan met with President of the Assembly Dr. Mahmoud al-Abrash. Sargsyan highlighted the depth of the Syrian-Armenian historical relations, stressing the importance of the parliamentarians' role in activating bilateral relations.

President Sargsyan discussed on Tuesday 23 March 2010 with Governor of Aleppo Ali Ahmad Mansoura means of developing the economic, industrial and commercial relations and increasing trade exchange. During the meeting Syrian business representatives called on Armenian businessmen to invest in Aleppo. They hoped that the Armenian Government reduces customs on Syrian goods. They also hoped that the Armenian Foreign Ministry facilitates procedures for Syrian businessmen to get visas to Armenia.

President Sargsyan visited the Armenian General Consulate in Aleppo and met with heads of Armenian religious denominations. He then visited an Armenian high school and the Virgin Mary (Sourp Asdvadzadzin) Armenian Othodox Church in Villat suburb in Aleppo where he participated in the prayers there. In the evening a dinner was organized on his honor at Ani restaurant in Sbidag Armenian center.

Meeting with the Syria's Grand Mufti

At the end of his visit to Syria, President Sargsyan visited on Wednesday 24 March 2010 the Syrian provincial city of Deir ez Zor, which has witnessed 95 years ago the most dark pages of the Armenian history. Sargysan visited first the newly inaugurated Armenian Honorary Consulate in the city and then he visited the Armenian Genocide Memorial Church and Museum. After the visit he took the plane back to Yerevan.

I am here today since I could not but be here. It is the greatest grief of my nation that has brought me here, the grief of the first genocide of the 20th century and the greatest disgrace of the civilized humanity. Up to this moment, in the 21st century, the stigma of that disgrace still remains on the foreheads of all those who have turned the denial of the evident facts into their policy, turned it into their bargaining chip and into their lifestyle and norm of behavior.

In the desert of Deir ez Zor the most monstrous acts of the tragedy had taken place, and it is neither possible to articulate the particulars of that tragedy in the language of human beings, nor am I going do that since these particulars are well-known even to those who publicly deny the veracity of the Genocide. Bereft of home and property, bereft of children and parents, bereft of health and the last hope, and finally bereft of the most important ? their homeland, these people were doomed to lose the last thing they had ? their life in accordance with the state orchestrated and meticulously developed plan of extermination.


I?m here to commemorate and to pray for the vast majority of my slaughtered nation that had suffered both physical and cultural extermination. I will elaborate neither on the quality, nor on the quantity of the loss. Let me recall a single fact: as a result of the Genocide the greatest share of the dialects of one of the most ancient Indo-European languages – the Armenian ? had been irreversibly eradicated along with its speakers.

We do this sincerely since we believe that there is no alternative to the living and development between the neighbors through implementation of what is proposed and still at the table, at least to start it up. The signing of the Armenian-Turkish protocols presented us with an historic opportunity that should have a logical destine.

We, however, do not accept the style of references to the Armenian-Turkish dialogue in attempts to avoid the recognition of the Genocide. I do not think it helps the process. Moreover, it is irrelevant to cite some Commission of Historians, since the Armenian-Turkish protocols provide for merely a governmental sub-commission on historic dimension. I assume everyone understands what it means and what the difference is. I ask all those who will have an occasion to elaborate or express themselves on the topic of the recognition of the Armenian Genocide: remember of this dessert, millions of ruined human fortunes and this ancient people deprived of their motherland and with pain in their hearts, before you make up your minds.

In 1915 the greatest Armenian poets of the 20th century – 35 years old Daniel Varuzhan and 37 years old Atom Yarjanian (Siamanto) had also been slaughtered. Before being tortured to death, they were undressed, because they wore European clothes. In those times and places European clothes were quite expensive. The executioners dressed up into the European clothes – stolen from the Armenian geniuses encompassing millennia old civilization, stolen from ordinary Armenians.

I would not interpret symbols signified in these images but I am unequivocally convinced: while preaching European apparel, manners or values no one has a right to cast these images in oblivion.

I am here to remind of the well-known words: ?It is impossible to kill a nation that does not want to die?. We mean to live and to grow. It is no more possible to intimidate or blackmail us since we have seen the most horrible. We shall continue to live and create with double vigor for us and for our innocent victims. We look forward since we have a lot to say and to share with each other, a lot to say and to share with the world: the brightness and glow that Daniel Varuzhan and Atom Yarjanian had no chance to share.

And here, in Deir ez Zor, we firmly and loudly say over and over again that we are, shall exist and will flourish.