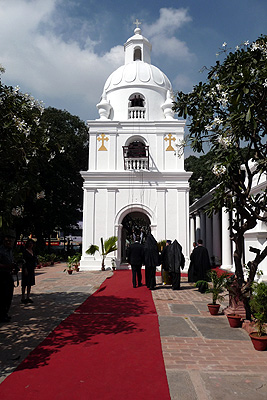 Church and belfry testament to a proud past long gone

St. Astvatzatzin Armenian Church, one of the oldest Christian structures in all of India and the Far East is located in Chennai (formerly Madras).

It was built in 1772 on the grounds an ancient Armenian cemetery that later became the private property of the Shahamirian family.

The church replaced an Armenian chapel that had been built in 1712 that was destroyed in the 1746 British-French colonial war. There are two dates inscribed at the church entrance ? 1772 1nd 1712. The new construction was financed by Shahamir Shahamirian (Sultanumian) in memory of his wife who had died at an early age.

St. Astvatzatzin (Holy Mother of God) is a testament to the glorious history of Armenians in Madras. One can say that the entire legacy of Armenian Madras, that had become the foundry of the new liberation thought of the times, has been stored under the arches of this magnificent church.

St. Astvatzatzin is resting place for many historic figures

The white-plastered church is located on a street where the noted merchants Shahamir Shahamirian, Samuel Moorat, the Gregory Brothers, Seth Sam returned after their long and arduous journeys and found eternal rest.

This is where the Madras Group was formed. Its members, including Movses Baghramian, Shahamir Shahamirian and Joseph Emin, soared no efforts to inculcate Armenian youth with ideals of enlightenment and progressive thought.

At least two Armenian printing presses were started here in Madras, and an Armenian school. Many of the notable members of the Madras Armenian community were laid to rest here. No wonder the street is named ?Armenian Street?.

Time has marched on and there are no longer any Armenians in Madras. But the walled Armenian Church, symbolizing their eternal glory rises proudly on a hill top. At first glance, it is hardly noticeable.

When bells ring locals know an Armenian has returned

The commercial shopkeepers that line the street know precious little about the church. But they are aware that it?s the oldest Christian cathedral in the district.

Few also know that the unique and valuable examples of the first Christian bells forged rest here in the church, in the three story bell tower that rises apart from the church.

The belfry?s three pair of enormous bells called the faithful to church for many decades. Sadly, now the bells are not rung every Sunday. When the peeling of the bells is heard, residents in the vicinity of Armenian Street know that an Armenian has come to the church. Most Armenian visitors today come from Calcutta. The bulk of Madras Armenians relocated to Calcutta in the latter half of the 19th century.

Each pilgrim that visits the Armenian church climbs the tower to see the bells and to capture the moment. All three pairs of bells bear dates. Each weighs 150 kilos. The oldest was forged in 1754.

This bell has an Armenian inscription that was added in 1808 at the district?s famous ?Aroulapan? foundry. The next bell was forged in 1778 and the other two in 1790. They were donated by Agha Shahamir Shahamirian in memory of his son Eliazar Shahamirian who died at the tender age of nineteen. The last pair of bells is the most valuable, having been forged in 1837 with the inscription, ?Thomas Mears, Founder, London?. This signifies that the bells were built at the prominent Whitechapel Bell Foundry in London. This foundry entered the Guinness Book of records as the oldest manufacturing concern in Great Britain. It mostly produces bells for use in churches.

The foundry has been operating since 1420. Traditionally, the name of the chief craftsman of the period would be engraved on the bells produced. From the 19th century up till 1968, all the finished products, including the bells of St. Astvatzatzin, have carried the moniker of ?Mears & Stainbank?

The oldest bell forged at this foundry is kept in London. It has the dubious distinction of being the world?s oldest. The next bell with the oldest inscription is the famous Philadelphia Liberty Bell, dated 1752.

The Liberty Bell epitomizes the American War of Independence from Britain. Tradition has it that the bell signaled the signing of the American Declaration of Independence in 1776. Every year, thousands of visitors flock to Philadelphia to gaze at this historic and valuable bell.

Perhaps the most famous bell produced at this foundry is the one that rings in the Big Ben clock tower in London?s Westminster Palace. Forged in 1858, it is the biggest bell ever forged with a height of 2.2 meters and a width of 2.9. It weighs in at an astounding 13 tons.

Other famous bells to come out of the Whitechapel Foundry are those at the Liverpool Mother Cathedral, London?s St Mary le Bow Church and the bells at Westminster Abbey. Includes in this list of ancient bells are two of the six bells found in the St. Astvatzatzin Church in Madras.

While it?s nearly impossible to state with any certainty that purchased the bells for the church, by the application of a bit of deduction and cross-referencing of the dates on the bells with the wealthiest Armenians in Madras at the time, we can speculate that it was either the Gregory Brothers or Seth Sam. It?s less likely that the Moorat Family purchased the bells since they adhered to the Roman Catholic Church.

Naturally, these bells symbolize the dedication of the Armenians of Madras to the Armenian Apostolic Church. On the other hand, they also reflect the wealth and prosperity that the community possessed at the time.

This short narrative allows us to delve, albeit briefly, into the life and times of the Madras Armenian community.

The English historian J. Hanvey, discussing the Armenian merchants of Madras during the 18th century, notes that, ?Armenians were successfully trading with Russia as well as with England. With their capital and contacts they held their own against the likes of English, Russian and Dutch traders.

We thus see that at the dawn of the 19th century, Armenian merchants, with their financial resources and prowess, were still giving the British East-Indian company a run for the money.

It is likely that with such investments in English manufacturing, the Armenians of Madras were aiming to preserve their influence in British controlled India.

Thanks Hermineh, as I can see a lot of this is already on the net, but you have done a good job compiling this article. I had initially done the research for the bells you will have to refer the article in the HINDU for that.

It is sad to note that Armenians do not pay anymore interest to re-settle in Madras India. Whilst I was caretaker of our church at Madras from 1994-2004, I had made several pleas to have Armenians come and settle from Kolkata and Armenia but nothing happened.

As can be seen the Armenian connections found in more than 10 other churches is of great historical importance. I used to go and check on these every month. I guess no one is doing that now.

My heart bleeds that there are no more Armenians at Madras me being the last one.

I have also offered to go back to take care of our church, but have been given negative answers anyway God is good.

You may have a look at the net of various articles I had got whilst at Madras.

I am now based in Bangalore and do visit our church at least twice a year.

I am happy that the Armenian church in Kolkata had sponsored the renovation works of the church. It looks really good now. I hope my fellow Armenians come from Hayastan / Kolkata and settle at Madras.

I will extend any assistance required since I know the local language etc.

Also Thomas Mears foundry have cast bells at the Holy Trinity Church here at Bangalore, something like the one at our Madras church. One improtant event was also that the first draft constitution for an independent Armenia was executed at Madras by a group of Armenians somehwere areound 1780.