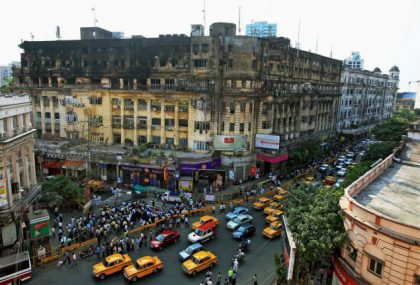 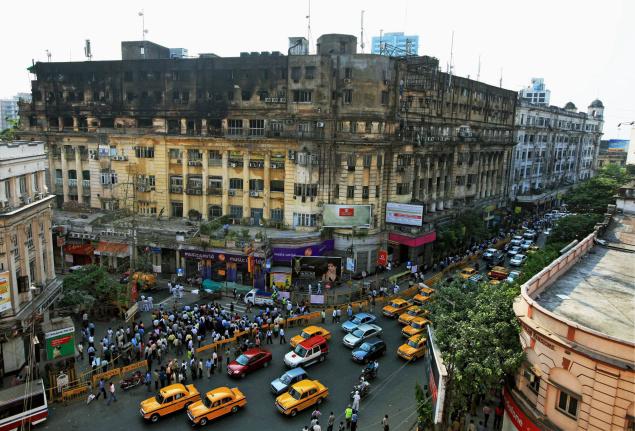 The burning of Stephen Court on 23 March 2010, a historical building in downtown Kolkata caused more than 20 human casualties. It became the focus of Indian media for the last ten days, mainly because of the details related to the tragedy, that could have been partly avoided.

Another topic of interest was the historical role of the building and its meaning in the everyday life of the vibrant city.

Guataman Bhaskaran said “Stephen Court, built by penniless Armenian refugee-turned-millionaire Arathoon Stephen, was among the innumerable stately mansions that along with magnificent churches and expansive garden houses made up the Calcutta (as it was then called) of the 1960s and 1970s.” (Hindustan Times, 25 March 2010)

He then wrote in some detail about the famous tea-house in the same building named Flury's, ending his remarks saying “Arathoon Stephen's daughter herself must have stepped into Flury?s for her cup of coffee. She lived in one of the flats in Stephen Court till her ripe old age as a witness to the bond her father first established with a street that got its name from a deer park which was once stood there.”

Leading columnist of Times of India Bachi Karkaria gave a vivid description of Stephen Court: “Stephen Court was the gateway to all this, to all of them ? and to every babalog with a birthday to celebrate. For, on its ground floor stood Calcutta?s ultimate cake shop, Flury?s. It escaped virtually unscathed on Tuesday. For small mercies, immense gratitude. Stephen Court had two approaches, but flaunted only one address: 18, Park Street. It was the road that defined Calcutta?s belle epoch, and one which now presides over a hesitantly resurgent Kolkata. It?s a street clung on to alike by exiles and inhabitants, young and old bonded in the seamless lure of entertainment.”

She then refered to the legacy of Arathoon Stephen. “Had even we heard of the Armenian Stephen Arathoon, who had built this hotel in 1911, as well as the Park Street mansion named after him. Like many Armenians he had come as a penniless refugee to Calcutta and turned tycoon. His Grand Hotel became a legendary caravanserai till a cholera outbreak forced it shut in 1937. Permit me to end with a personal elegy for tragic Tuesday. In the 1980s, while researching a book on the Grand Hotel, I had interviewed Stephen Arathoon?s octogenarian daughter in her flat in Stephen Court . Fifteen years later, and two floors down, I met Arathoon?s grand-daughter, while writing a book on Stephen Court?s best known tenant, Flury?s.” (Times of India, Bangalore, 24 March 2010).

The Telegraph, Calcutta, compiled the following information about Arathoon Stephen: “Born in Iran in 1861, Arathoon Stephen was a member of the Armenian community in Calcutta, which is believed to have spent a huge amount of money in shaping the growth of the city. Stephen was a shareholder and the first managing director of Stephen Court Ltd. He founded the Grand hotel in Calcutta and the Everest hotel in Darjeeling, which also saw a devastating fire. The Everest hotel is now known as the Swiss Hotel. Stephen lived at 2 Camac Street and was known as a patron of education and art. He died in May 1927.”

Nora Aratoon, who lives opposite of Stephen's Court said to Kolkata Mirror.com “I have been living here since I came to Kolkata. The Armenians had built Stephen?s Court. It?s a shame that the people staying there couldn?t take care of the heritage. I am an Armenian myself, and I lament the death of the people. There is no point blaming anyone. We need to be more cautious in future.” (Kolkata Mirror.com, 25 March 2010)

About a week after the fire, the West Bengal government on 29 March 2010 formed an 11-member probe panel to look into all aspects of the tragedy and fix responsibility for any negligence on the part of state agencies, landlord or tenants.

Kolkata: Octogenarian Irene Harris, the grand-daughter of Arathoon Stephen who built Stephen Court here and a long-time resident of the grand old building, is in trauma now after this past Tuesday's devastating fire.

?The sight of her grandfather's building, built a century ago, in flames left her worried and shaken and she went into a trauma,? said the authorities of Sir Catchik Paul Chater Home, better known as Armenian Home, in Park Circus where she and her husband have found refuge.

?What added to the shock was that the building caught fire on her birthday,? said Peter Hyrapiet, president of the Armenian Club located in nearby Queen's Mansions.

?She went to her flat in Stephen Court on Saturday to collect her belongings,? he said.

Eighty-four-year-old Irene whose grandfather, an Armenian businessman who also set up the famous Grand Hotel here, and her 89-year-old Englishman husband Jimmy were in their second floor flat in the building when the fire broke out.

?We were at the club when the incident happened. I told another member to bring down the couple, who are childless. They were then taken to the Home though they were very reluctant to go,? Mr. Hyrapiet said, adding, ?They slipped out of the Home to see the flat and their belongings on Wednesday. Their flat is intact.?

Irene's neighbours said she was born in Kolkata and baptised in the Armenian Church here. Her grandparents were extremely rich so she did not need to work.

Meeting neighbours and having a cup of coffee at Flury's on the ground floor was what she loved to do.