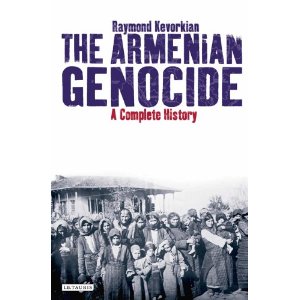 “The Armenian Genocide: A Complete History”

Raymond Kevorkian's study, The Armenian Genocide: a Complete History, was the focus of a lecture at SOAS (University of London) on 6 June 2011.
Dr. Kevorkian, who was present at the event, was introduced by Ara Sarafian (Gomidas Institute). The lecture was organised by the Armenian Studies programme at SOAS and the Gomidas Institute (London).

In his introductory remarks, Sarafian noted that Raymond Kevorkian's work presented a new standard in Armenian Genocide research. This was because Kevorkian managed to combine a variety of eyewitness accounts, more than any other scholar, to corroborate a detailed narrative of the Armenian Genocide. He integrated Armenian language accounts–the voice of the victims–and re-engaged with an Armenian intellectual tradition that had been lost. This tradition, so vital in any discussion of the events of 1915, was the work of surviving Armenian intellectuals who, after WWI, reflected on the world around them and articulated a critical perspective on Armenian issues. They were well versed in Ottoman and other languages and provided invaluable commentaries on the Armenian issue as it was discussed in Ottoman newspapers and official records, such as the 1918-1919 trials of Young Turk leaders.

Sarafian also pointed out that Kevorkian's work had a cutting analytical element, which started from the build-up to the genocide, the actual genocidal process itself, and the post genocide politics of Ottoman Turkey. At the centre of his work were a set of regional micro-histories which looked at what happened in different regions of the Ottoman Empire. These detailed accounts allow readers to see both the common genocide policies that were pursued in 1915, as well as the differences across the empire. For example, one could see that most Armenians in the eastern provinces were massacred. The pretence of a ?deportation policy? was minimal.

Most of the deportees who actually arrived in the so-called resettlement zones were from central and western parts of the Ottoman Empire. Kevorkian also divided the genocidal killings into two distinct phases. The first was carried out in 1915, when most Armenians were killed. Those who survived deportations and reached resettlement zones remained in camps until a second decision was taken to destroy them in 1916. Within three months, most of these surviving Armenians were also killed.

Kevorkian, in his presentation, elaborated on various aspects of his book. He stressed the organisation of the process of genocide, including the confiscation and re-distribution of Armenian properties, in an effort to co-opt different groups into the genocide process, and to create a new Turkish middle class to replace that of Armenians. The overarching ideological context of the killings was the creation of a Turkish state. Religion (Islam) was also exploited in the organisation of killings.

Kevorkian's presentation was followed by a lively question and answer period. Copies of his book were available for sale at concessionary prices.

*The Armenian Genocide: a Complete History, 1,200 pages, was originally published in French. The English translation was released by I.B. Tauris in March 2011 and is now available from Garod Books Ltd. RRP ?45.00. Post free. To order a copy, please write to [email protected]. Offer valid for the European Union. 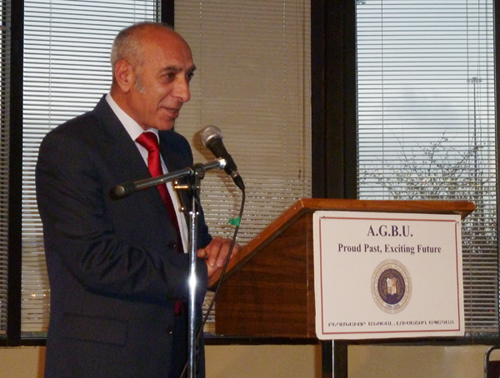 On Tuesday, May 3, French-Armenian historian Raymond Kevorkian began his North American book tour in the city of Toronto for his newly translated The Armenian Genocide: A Complete History.

Over a hundred people attended the event at the AGBU Toronto center, to hear Kevorkian, who is the director of the AGBU Nubarian Library in Paris and a lecturer at the Institute Fran?ais de G?opolitique, University of Paris, discuss his seminal study.

In his 1,000-page book, Kevorkian considers the role the Armenian Genocide played in the construction of the Turkish nation state and Turkish identity, and explores the ideologies of power, rule, and state violence. He also examines the consequences of the violence against the Armenians, the implications of the deportations, and the attempts to bring those who committed the atrocities to justice.

The book is the first to make extensive use of the archives of the AGBU Nubarian Library, which has an important collection of papers, documents, and photographs related to the Armenian Genocide.