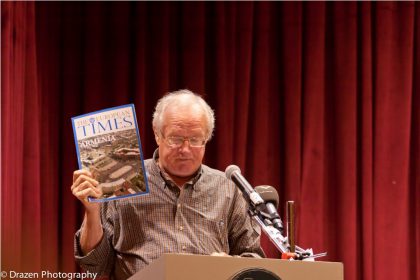 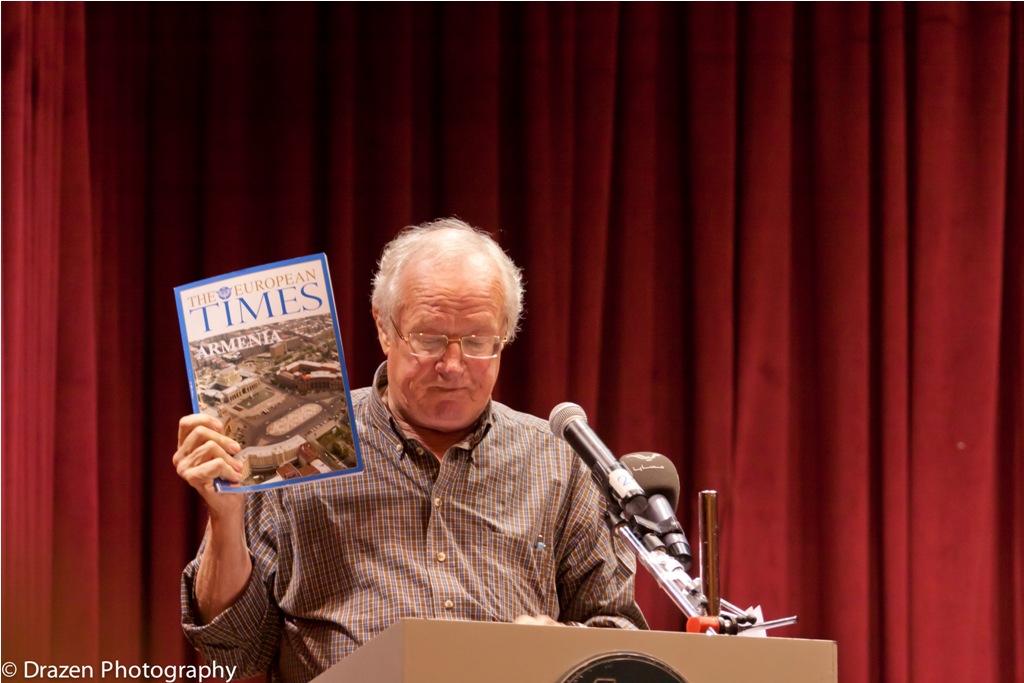 Described by the New York Times as “probably the most famous foreign correspondent in Britain”, English writer and journalist Robert Fisk was in Sharjah on 27 April 2012, as a guest speaker at an event organized by the Youth Committee to commemorate the 97th anniversary of the Armenian Genocide.

“Reporting The Middle East: Lies and Genocides” was the title of his lecture that took us to the conflict zones in the Middle East and especially the policy of genocide by the Young Turks and the subsequent Genocide denial by the Turkish governments after the independence.

The Middle East Correspondent for the British daily newspaper “The Independent” noted that Turkey as a society has been changing. He recalled back in 1999 when he reported about the earthquake in Turkey he did not meet anyone ready for openly acknowledging the Armenian Genocide. Today, however, he says, there are many people, scholars and ordinary men and women, who are talking openly about the subject and are keen to investigate more. He does not see however a quick recognition on the part of the state of Turkey.

His lecture which lasted two hours was full of details. Fisk himself gives importance to the details and asks the audience and the readers to examine all the details. He reminded us that there are many details of the Genocide still buried in unknown and least expected places. Your duty as Armenians would be to gather every piece of evidence, information, photos, documents, tools, etc. , so that more can be learnt on the subject. One photo can sometimes tell far more than a whole chapter in a book, he said.

He had also another piece of advice to the Armenians: to hail the legacy of those Turks who during the Genocide times risked their lives and helped Armenians. Their number is not big and their names are recorded in the different books including my books, he said. If the Turks acknowledge the heroism of their countrymen who saved the Armenians they would be acknowledging the Genocide as well.

Fisk described his experience in Syria when he went to Der Zor and Markada to find about the locations where thousands of Armenians were perished and where their bones are still easily found mixed with the dark soil. The Arab population is well aware about the details as many Armenians children were saved by the local families.

Fisk went into the details related to the story of Antoura orphanage in Lebanon, which he once described it as the “living proof of the Armenian genocide“. The orphanage was managed by one of the leading Turkish feminists of the time Halide Edip Adivar, who with the support of Jemal Pasha the brutal governor of Syria, wanted to prepare a model school for the turkification of the Armenian, Kurdish and Arab orphans during the World War I. He showed the picture on the staircase of the orphanage where Jemal and Halide were standing surrounded by Turkish notables proud of their achievements. The work done by Missak Kelechian is an example about how one individual can research historical facts and unearth facts of significance. During one of his researches Kelechian found a very rare 1918 report by an American Red Cross officer who has visited the Antoura orphanage after the defeat of the Turks and who spoke to the remaining orphans. Using the information he managed to find the mass grave in Antoura orphanage. 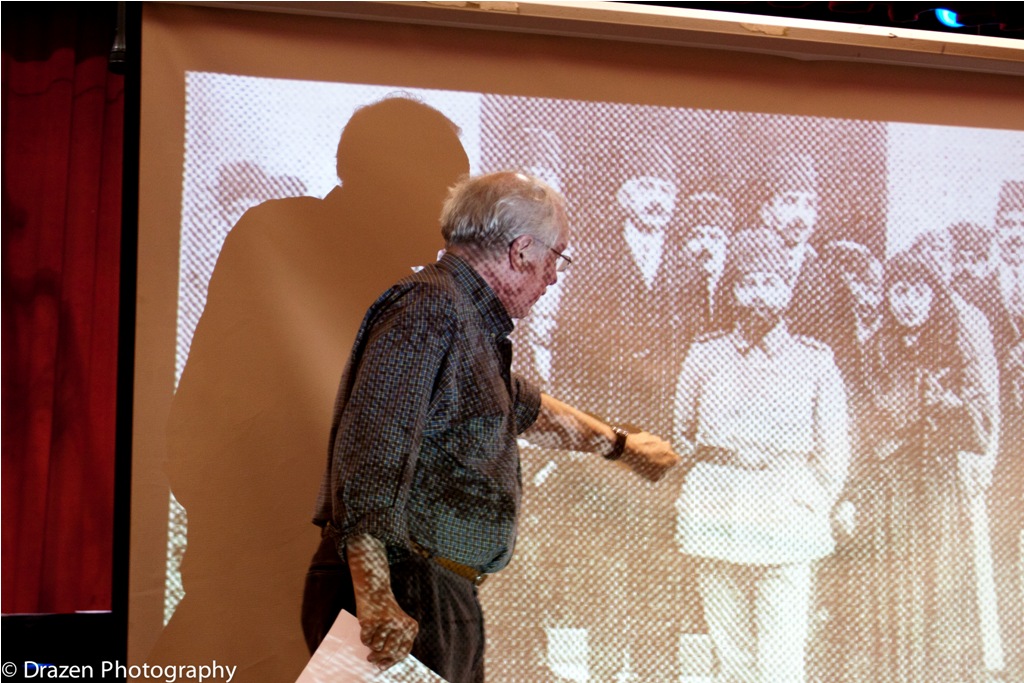 Fisk showed to the audience a series of newly exhibited photos. He praised the work carried on by the Armenian Genocide Museum and Memorial in Yerevan, referring that it needs funding. He bitterly criticized the administration of President Serzh Sargsyan in Armenia for approaching the Turks on the expense of the Genocide recognition. He showed a publication recently funded by the Armenian Government about Armenia, its people, history, economy, lifestyle etc., where not a single word has been mentioned about the Genocide. Corruption is the biggest enemy of the Armenian people, he said, answering to one of the questions made by the audience.

Fisk informed the audience that his upcoming book will have extensive reference to the Armenians. One of his several books “The Great War for Civilization: The Conquest of the Middle East” (2005) had a separate chapter on the Armenian Genocide.

Fist was awarded in 2001 with the David Watt Prize for “outstanding contributions towards the clarification of political issues and the promotion of their greater understanding” for his investigation into the Armenian Genocide.

DETAILS ABOUT THE EVENT

The cultural side of the event: Opera singer Christine Bulbulian sang songs by Gomidas accompanied by pianist Syuzanna Ohanyan.

Welcome note was made by Ara Keusseyan, Chairman of the Council of the Armenian Community in Dubai and Northern Emirates.

Ani Bezdigian introduced the lecture to the audience citing examples from her own interest in his writings.

A selection of Fisk's books signed by the author were sold after the cocktail reception.

Organizer: Youth Committee of the Council of the Armenian Community in Dubai & the Northern Emirates. 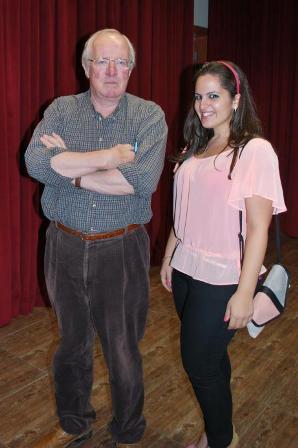 Introduction speech by Ani Bezdigian on behalf of the Youth Committee

We are gathered here today to honor the 97th anniversary of the Armenian genocide with Mr. Robert Fisk. He is an English writer and journalist who has a PhD in political science from Trinity College, Dublin. Fisk is currently based in Lebanon and is the Middle East correspondent of the Independent, a British newspaper. He holds more British and International Journalism awards than any other foreign correspondent.

I, personally, am a huge fan of Mr. Fisk, I was first introduced to his hypnotizing book, “The Great War for Civilisation” in my sophomore year in an economics class. I just couldn?t take my eyes off the book, every page pushed me to read just one more chapter and so I was forever captivated by his writings. From that day onwards, I wake up and the first thing I do is check the opinion column in the Independent. There is no better way to start my morning than the brain teasing articles of Mr. Fisk.

You might ask what is it that differentiates Mr. Fisk from the rest of the journalists? The answer to that is simple, he?s distinctive because he writes from the heart and his audience can feel it, he touches the very depths of their hearts. Also, it?s the personal touch he adds to his writings that connects him to his readers, keeps them yearning for more, and leaves them hanging at his every word. Finding a Westerner who tells the truth about the Middle East is extremely rare, someone who is fearless enough to write the facts even if that will anger some powerful nations, including his own.

Fisk has visited Deir Zor first hand, maybe that is the reason he fiercely defends the Armenian Holocaust and makes sure to write it with a capital H. On second thought, I don?t want to use the term “defend”; I?d rather say, “reports hard facts” because Fisk is one of the few unbiased journalists. Seeing the remains of the deceased and feeling their ignored pleas for justice probably awakened in him a strong sense of responsibility as a reporter to inform the world about the horrors that were committed in the fatal year of 1915.  With the title “journalist” comes a certain obligation to present the audience with the unaltered truths, without manipulation or any hidden agendas and leave it up to the audience to form a conclusion. And I know no other man who is more eligible to hold this noble title than Mr. Robert Fisk.

I do not want to stand here and speak of the greatness of a man who is here. His lecture today will demonstrate the ability he has to touch the hearts and souls of every one who is present tonight. Please welcome Mr. Robert Fisk.

Photographs have an unstoppable power to convince and Armenians need to search for more documents and evidence on the Armenian Genocide, noted British writer and journalist Robert Fisk said on Friday night.

He was delivering a lecture entitled ?Reporting the Middle East: Lies and Genocides? to commemorate the 97th anniversary of the Armenian Genocide at Pierre Keusseyan Community Hall, Sharjah.

Talking exclusively to The Gulf Today on the sidelines, he said many photographs on the Genocide are yet to be recovered and perused.

The Armenian Genocide was carried out during World War 1 between the years 1915 and 1918. The Armenian people were subjected to deportation, abduction, torture, massacre and starvation.

Asked why Turkey was refusing to acknowledge the genocide, Fisk said the reasons may be many.

?While one of the reasons is Turkey?s attempt to join the European Union, there are also land issues. Many Armenians may ask for land back.?

On other topics, Fisk said he doubted ?a state of Palestine will come about.?

Asked about being ?technogically-challenged? as he puts it about himself, Fisk blasted the Internet, saying it took people away from the reading habit. ?It is because of Net that words are misspelt and are ungrammatical. I receive around 250 real letters a week and that gives me lots of satisfaction,? he told this correspondent.