It is customary every April to see one or two articles in Kuwaiti media about the Armenian Genocide. Kuwaiti intellectuals, more than other GCC nationals, have shown sympathy and understanding to the Armenian question, bearing in mind that Kuwait itself has been a victim in recent times to a brutal invasion by a neighboring country.

In reality, Armenia and Kuwait are both located in the same geopolitical vicinity, having common borders with Iran and sharing concerns for regional safety and stability.

The Armenian Community in Kuwait has a history of more than 60 years (it acquired an organized structure in the sixties of the last century). Armenian names are easily encountered when talking about the past of Kuwait, before and after the advent of large number of working population from Asian countries. Armenians are mentioned as pioneers in many fields, such as medicine, mechanics, metal works, engineering, etc. They endured the difficulties of everyday life in old Kuwait (before the introduction of modern facilities) and suffered, like the rest of the population in Kuwait, political difficulties, most notably the experience of foreign invasion. The community dwindled in numbers in the early nineties of the last century, following the Gulf War, but it regained recently some of its past vigor (see: Kuwaiti Armenian school recovers from the latest war in the region).

The Armenian Community in Kuwait commemorates every year the Genocide with the presence of local media. Especially in the last two years, since the renovation of the official reception hall in the Prelacy center in the Salmiya suburb, journalists are invited on 24th April and briefed about the Armenian Genocide and related community and pan-Armenian issues (Below photo: Archbishop Goriun Babian with the visiting journalists in 2006).
Kuwaiti journalists have repeatedly written on Armenian subjects. One courageous columnist is Ahmad Al Rabe'e who published in 2005 an article in widespread pan-Arab daily “Asharq Alawsat” in which he asked the following questions:

“But what about the Armenian Genocide? Why this appalling silence every year? Why the Turkish insistence on not publicly apologizing to the Armenian people, although the current Turkish generation is not guilty and the apology would be for a historical crime, all of whose victims and perpetrators have passed away by now. I am used to write on the occasion of the Armenian Genocide. I am also used to receive every time a letter from the Turkish Embassy in Kuwait, in which an attempt is made to explain the Turkish point of view, running away from self-confrontation and from telling the truth”.

This was two years ago, but the habit of the Turkish Ambassador (H.E. Shaker Fakiyli) to argue with journalists writing on Armenian issues has not changed. Even a mere visit of “Al Qabas” daily newspaper?s journalist Layla Al Sarraf to Yerevan this April and her description of what she witnessed there (the silent march of the Armenians to the Genocide Monument) were enough reasons for His Excellency to repeat the same Turkish argument: The Armenians living in the Ottoman Empire collaborated with the foreigners; the Government was obliged to transfer them to safer places; The Armenians died due to diseases and attacks by local population (Kurds and Arabs); The Government did its best to protect the deportees; Turkish archives are open for researchers; Turkish Prime Minister has asked the Armenian President to establish a joint committee of historians and experts to investigate and discuss the development in 1915; Turkish Government is exerting huge efforts to achieve reconciliation between the two peoples, etc.

This time the Ambassador even went further and attempted to misguide the readers using a sensitive issue: terrorism. Commenting on the feelings of compassion journalist Al Sarraf experienced at the silent march of the Armenian population to the Genocide Monument, he asked her ?Why ignore the Armenian terrorist campaigns against Turks?? (in reference to the revengeful acts committed against Turkish diplomats mainly in Western countries in the seventies and eighties of the last century).

The Ambassador ended his thoughts with a reference made to an article by Arthur Baghdasarian (ex-speaker of the Armenian Parliament and now opposition figure), published in Wall Street Journal (without mentioning where the complete text of the article could be found) in which, according to the Turkish Ambassador, the Armenian politician criticizes rightfully the policies of his Government accusing it of being based on the past, instead of being geared towards the future.

Giragos Kuyumjian the known Kuwaiti Armenian writer who is behind many articles on Armenian subjects in Kuwaiti Arab and English language media (see “Ankara should admit to Armenian massacres“, “The Armenians, the Turks and the Europeans“, “To the Ambassadors of the European Union countries” and many others, including more than 20 articles in the Arab press / see list here), this time also had the final say. In a letter published in Kuwaiti Arab daily “Al Qabas” on 24 May 2007 he deals with some of the issues mentioned by the Ambassador, leaving the rest to the judgment of the readers (see letter in Arabic here).

“Where are the Armenians who used to live in the area that extends from present day Anatolia to Antioch?“, asks Kuyumjian in response to Ambassadors assertion that no genocide was committed by the then Ottoman government.

“Where is the indigenous population that lived in the present days South Eastern Turkey for 3000 years?”, continues Kuyumjian and wonders how the Turkish government could claim that these people were merely deported for their own safety (?). Ironically the Ambassador fails to see that if this is true, then why he and his Government have not taken any steps in inviting the surviving decedents back to their land.

Kuyumjian then refers to the Turkish call to establish a joint committee of historians to examine the events of 1915 and explains that this call is meaningless in relation to a Genocide that does not lack evidence, even in the archives of countries considered allies of the Turks in WWI. “Turkey obviously attempts to buy time and to cast shadows of uncertainty on the course of the Genocide recognition by countries as far as Uruguay and as close as Lebanon”, underlines Kuyumjian. It is obvious that opening the Turkish archives in front of the researchers after 80 years of filtering all Genocide related documents would not serve much the Armenians.

Kuyumjian ends his comments by reminding the readers that the above Turkish proposal comes in a time when Turkey enforces severe embargo against Armenia, in coordination with its ally Azerbaijan on two fronts. Armenia has confirmed its political will to discuss all pending issues with Turkey, without imposing any preconditions for the establishment of diplomatic relations, an appeal that was systematically avoided by the Turkish side.

Finally Kuyumjian refers to the terrorist acts that took place in the seventies and eighties of the past century against Turkish diplomats, and says that these acts were part of a leftist revolutionary wave that swept the Middle East and other societies of the time. They have been already characterized as terrorist acts and they do not represent any official Armenian policy, the same way a present day terrorist act committed by a Turk individual does not represent the policy of the Turkish Government.

We hope that the Turkish envoy takes into consideration Kuyumjian's article and other comments made by honest Arab and Muslim journalists in Kuwait. He should not underestimate the logic of the Arab readers. After all Arabs were witnesses to what happened to the Armenians and it is difficult to play them as a fool. 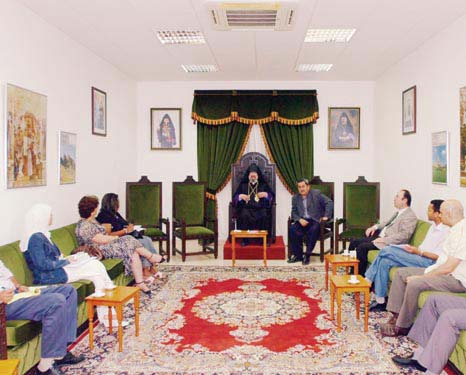 Archbishop Goriun Babian with the visiting journalists in 2006