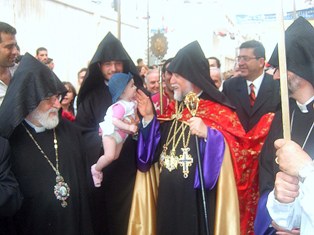 Ending his Pontifical visit to Aleppo, His Holiness Aram I headed on May 23 to the second leg of his trip, Jezireh, Syria, in a convoy including the Primate of the Diocese of Aleppo, Bishop Shahan Sarkissian, members of the Cilician Brotherhood and members of the Diocesan assemblies of Aleppo.

At the borderline of Jezireh, The Catholicos was welcomed by soldiers who honorably accompanied him to Kamishli. Along with the city's thousand of Armenians, local Arabs and Kurds also filled the streets to welcome the Armenian Pontiff. Walking through the ranks of scouts and while rice was being thrown from the balconies as a sign of welcome, His Holiness headed towards the Church.

Government officials from the region, the head of Ashirets, the primates of all the churches in Jezireh and a huge crowd threw an honorable welcome to the Catholicos, who came on his second official visit to the region.

His Holiness considered Jezireh to be an exemplary community and announced that he will inaugurate a new church to become the community's heart. ?We have come to lay the first stone of the new church, which in itself is evidence of your faith and commitment towards the Armenian Church,? said His Holiness.

The sermon was followed by an Achahampouyr with faithful approaching the Pontiff in unending queues until late at night to receive his blessings. Parents brought their children and newborns to receive the blessings of the Pontiff.

His Holiness held a number of meetings with government officials in the Prelacy of Jezireh on the following day. Committees from all the churches in the region, representatives from all the unions, the administrative staff of Sunday Schools and the Ladies Guilds of churches also visited the Pontiff.

Inauguration of the new church in Kamishli

The Armenians of Jezireh, Syria, lived a historic day on 24 May 2007 when His Holiness Aram I inaugurated the new church of Kamishli.

?For decades, the Armenian neighborhood church became the spiritual and national home of our nation. After the Armenian Genocide, your fathers built the church before building their houses. And today, driven by your commitment towards the Armenian Church, you build a new one that will become the bastion of your faith,? said His Holiness during the inauguration service.

The Vicar of Jezireh, Rev. Fr. Massis Zobouyan highlighted the importance of this historic inauguration. Archbishop Gomidas Ohanian and Primate of the Diocese of Tehran, Archbishop Sebouh Sarkissian, who accompanied His Holiness on his Pontifical visit, spoke as former servants of the Armenian Church in Syria, about the dream the Armenians of Jezireh had kept for years for building a church in their region.

An official dinner party was organized in honor of His Holiness in the evening. A cultural entertainment program was carried out with poem recitations, singing and a traditional Armenian dance performance. About 200 guests, including government officials, representatives from the Diocese, Armenian unions and organizations, were present.