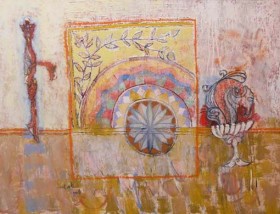 Abu Dhabi: An Armenian artist has brought his work to Abu Dhabi in a bid to promote an exchange of dialogue between all cultures.

Aram Dovlat is exhibiting “The Encounter”, a 35-piece collection, at the Cultural Foundation, in what he describes as various encounters between man and history, the quest for spirituality, and a language shared between cultures. The exhibition, which began on Tuesday, runs until 7 June 2007.

At the core of Dovlat's work is the history of Armenia, a country that lies at the crossing of East and West. “It's a dialogue between history and the present,” he explains. “I don't like to push my perceptions of my art onto people; I like to leave it up to people to see what they want.”

“The Encounter” is filled with symbols that Dovlat uses to convey emotions, including flowers, which symbolise peaceful coexistence, birds which are bearers of good news, spirals for eternity, and squares which symbolise family. The artist's work is contemporary and the exhibition hopes to expose the public to a different form of modern art.

– Has participated in several group and solo exhibitions in Armenia and abroad.

– Dovlat's work lies in between the contemporary part of his craft and the history which he attempts to trace.


The 35-piece collection titled The Encounter will be displayed at the Cultural Foundation in Abu Dhabi (capital of the United Arab Emirates) until 7 June 2007.

Invitation to attend the exhibition.