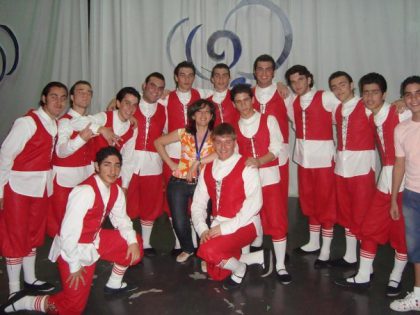 
Shakeh Dance Group of the Armenian Relief Society staged a very impressive performance in Kuwait on 08 May 2009.

This was the second time since its establishment in early 2007 that this troupe performed in public. It has given a completely new dimension to the Armenian presence in the State of Kuwait, making it possible to convey a cultural message to all those living in Kuwait.

The organized presence of the Armenians in Kuwait dates back to the 1950s. The community is preparing to celebrate 50 years since the establishment of the Kuwait Armenian School. Last year a glossy album was published, to commemorate the 30th anniversary of the Armenian scout and athletic movement in Kuwait (Homenetmen).

Most of the activities in the community address the Armenians, but this time, with Shakeh dance group, the scope was wider and foreigners were invited to enjoy the event.

Months of continuous work under the care and guidance of choreographer Anna Manougian has been justified.

This year several dignitaries were invited to the event through the contacts of the Catholicosal Vicar of Kuwait and Gulf, Archbishop Dr. Goriun Babian, including Ambassadors and heads of religious groups. The 800-seat American International School?s hall was completely full. This was the first time that such a large-scale event has taken place in the history of the Armenians of Kuwait, with such big presence and with high level representation.

The event started with a welcome note in Armenian by Mayda Movsesian, followed by another note in English by Alvart Bablanian, both members of the Armenian Relief Society (the Independent Unit in Kuwait). Presenter Houri Deyirmendjian, who was in charge also of the decoration, announced the beginning of the dancing program.

The first dance was a Greek one, which created great enthusiasm. Other dances from European and Latin American background followed. It was difficult to realize that the dancers were all students who have been practicing for weeks with all their love, faith and dedication to this work.

The second part of the program was completely devoted to Armenian traditional dances. Karni Boghosian and Rosdom Sarkissian contributed with special songs.

At the end of the event, Ambassadors of USA and the Vatican were invited to express their thoughts. They both praised the organizers, especially Archbishop Babian, who has managed to highlight the many good aspects of the lively Armenian community in Kuwait.