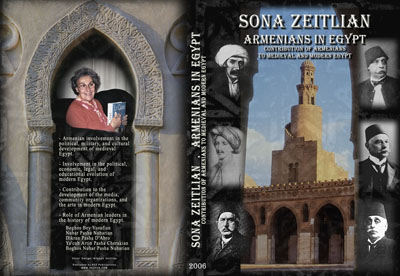 The book is the first attempt to present in English the continuous presence of Armenians in from the Roman to Byzantine to modern times.

Sona Zeitlian presented her book to the Egyptians as “a labor of love by a member of a grateful community that had seen much goodness in “.

“Hraztan Sarkis Zeitlian Publications” announces the publication of a new book by Sona Zeitlian titled: “Armenians of Egypt: Contribution to Medieval and modern ”

The book is published in (2006) in English language and includes maps and illustrations. The publication was made possible by a grant from Alice and Arto Markarian. Number of pages: 268 pages.

Synopsis of the book:

This book is an extensive research describing the contribution of the Christian Armenian minority to the cultural and economic evolution and modernization of . At a time of religious, sectarian and tribal divisions and the debate about the “clash of civilizations,” the book details the virtues of inclusion, collaboration and mutual respect that have dominated Egyptian life and the communities of the .

In his Foreword to the book, Dr. Ruben Karapetian (Ambassador of the of to and several other African countries) states that the book “is a remarkable contribution to the growing scholarly appreciation and documentation of the long, but little studied, rich history of relations between Egyptians and Armenians.”

Part I of Sona Zeitlian's comprehensive study charts the participation of Armenians in the fields of political, military, economic and cultural life of 11th and 12th centuries.

There are detailed descriptions of such personalities of Armenian descent as Badr al-Gamali who saved the Fatimid Caliphate from collapse and shaped the second century of its existence. The unique personality of Shagarat al-Durr, a former slave of Armenian descent, one of the rare women in Islamic history who have ascended the throne, held absolute power and made a difference in the political and cultural spheres.

Indeed, the book is the first attempt to present in English the continuous presence of Armenians in from the Roman to Byzantine to modern times. Some came seeking knowledge at famous institutions, others trade opportunities, but most were refugees fleeing oppressive rule and massacres in their native land. They benefited from the goodwill of the rulers, the prevailing atmosphere of tolerance, security and peace as well as the rich resources of the country. In turn, they put their skills to use, becoming loyal and productive citizens and some have left an indelible mark on the evolution of the country.

Part II of Zeitlian's work is a remarkable contribution to the documentation of the achievements of Armenians in leadership positions in the 19th and the 20th centuries. Among them, Boghos Yusufian, Minister of Trade and Foreign Affairs, who expanded Egypt's maritime trade and promoted international exchanges through well-connected Armenian merchants; Nubar Nubarian, Minister of Public Works, of Justice, then Prime Minister who greatly improved the lot of the peasants, promoted the establishment of railway lines, overhauled Egypt's legal system; Ya'cub Artin Cherakian, long time Minister of Education who contributed to drawing the framework of Egypt's public education system, taking care to reconcile reformist ideas with local traditions; Dikran D'Abro, long time Foreign Minister, who defended Egypt's sovereignty against foreign threats and the excesses of the British occupation; Boghos Nubar Nubarian, who was one of the initiators of a grand land reclamation project that has become Heliopolis, a flourishing modern city. He was also one of the founders of the Armenian General Benevolent Union (AGBU), a venerable philanthropic institution with chapters throughout the world.

Part III is a painstaking account of the contribution of Armenians to 's architecture, painting, caricature, sculpture, photography as well as crafting and designing jewelry. There are chapters devoted to the role of Armenians in the development of light and heavy industries, commerce, the mass media, education and social organizations.

There are messages of appreciation by Dr. Nabil Fahmy, 's Ambassador to the and Dr. Hussein Hassouna, Ambassador of the League of Arab States to the .

The official presentation of Sona Zeitlian's book took place in , on 2 April 2006 under the auspices of the Embassy of the .

The event was hosted at the Mubarak Public Library with the Chairman of the Board Ambassador Raouf el-Reedy making the opening remarks and acknowledging that he had discovered much of interest hitherto unknown to most Egyptians.

's Ambassador Dr. Ruben Karapetian stressed the value of the book in consolidating Egyptian Armenian friendship and cooperation. Then the author presented her work, qualifying it as a labor of love by a member of a grateful community that had seen much goodness in .

Sona Zeitlian is an award winning educator and author with a long career of community activism and leadership in , and . Her writings have focused on Armenian mythology and legends, folk tales based on the Armenian oral tradition, Armenian women's intellectual history, the rights movement and current issues of Armenian women in the Homeland and diaspora.

Sona Simonian-Zeitlian was born in . She has studied social sciences and psychology at the in Cairo (AUC) and taught in community schools in and and finally in since 1989.

She has acted as senior editor of Los Angeles-based HSZ Publications. In 1995 she was nominated to the Advisory Board of Gustav E. Von Grunebaum Center of Near Eastern Studies at UCLA. She has been active in educational work and community service and is highly acclaimed for her lectures, panel discussions and seminars.

Sona Zeitlian has received awards by the alumni of 's as well as the Armenian Relief Society in recognition of her career as educator and for her dedication to community service. During the Lebanese Civil War, she earned the gratitude of the women in the endangered zones by reaching out to them to raise their morale and strengthen their resolve to endure the hardships of daily life.

Her other publications are:

1- “The Role Of Armenian Women During the War of Liberation” (in Armenian and winner of the Cilician Catholicossate's Melitinetsi Award). This is a seminal work charting the contributions of Armenian women to the liberation movement of 1895-1918. An expanded edition was reprinted in in 1992.

2- “The Folktales of Musa Dagh” (in Armenian and with illustrations by Lucy Tutundjian). Based on the oral tradition, the folktales are preceded by a detailed analysis of the people of Musa Dagh as well as the characteristics and themes of their tales.

3- A series based on Armenian legendary history entitled “Armenian Braves” namely, Haig and Aram Nahabeds, Ara the Handsome and Dikran Yervantian, King Ardashes, Mushegh Mamigonian and Kail Vahan (in Armenian and with illustrations by Lucy Tutundjian).

4- “The One and Only” a bilingual (English/Armenian) folktale with illustrations by Shushig Arslanian).

She is currently preparing for publication more bilingual folktales.

To order a copy of: “Armenians of Egypt: Contribution to Medieval and modern “, please contact:

Photo: Cover of the book