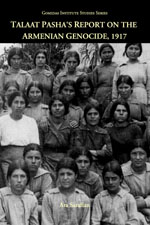 Behind the facade of innocence: Talaat Pasha tracked progress of Genocidal Program

Recent documents released in Turkish archives, combined with surviving documents from Talaat's Pasha's private papers, confirm that Talaat was indeed the architect of the Armenian Genocide. There is a clear record that he ordered and supervised the general deportation of Ottoman Armenians in 1915-16, and that he followed the fate of such deportees from close quarters. Talaat was sent updates regarding Armenians at different stages of deportations, as well as information about the fate of others who were subjected to special treatment. Although a great deal of Ottoman records still remain unavailable in Turkish archives, the available records show that the Ottoman deportation thesis was a smokescreen for the annihilation of Armenians. Ottoman records in Turkish archives, as well as Talaat's 1917 report, show that less than 100,000 Armenians survived in the so-called resettlement zone for Armenians. According to Talaat's report on the Armenian Genocide, most Armenians in the Ottoman Empire had disappeared between 1915 and 1917, or they were dispersed in different provinces of the Ottoman Empire for assimilation. The forced assimilation of hundreds of thousands of Armenians was indicative of the power, control and purpose of the Ottoman state.

Talaat Pasha's Report on the Armenian Genocide, 1917 is the closest official Ottoman view we have of the Armenian Genocide. The report was undoubtedly prepared for Talaat Pasha and meant for his private use. It was not meant for publication and probably only survived because Talaat was assassinated in 1921 and his widow gave the report to a Turkish historian who eventually published it.* No such record has been released by Turkish archives to date, though the data presented in the 1917 report can be checked against the available Ottoman records and stands scrutiny.

According to Talaat's figures 1,150,000 Armenians disappeared in the Ottoman Empire between 1915-1917. This number includes well over 100,000 Armenians who fled from the Ottoman Empire in 1915 (and died in large numbers from hunger, exposure and disease), but it does not include tens of thousands of Armenian women and children who were absorbed into Muslim families or placed into state orphanages for assimilation.

In this publication of Talaat's report on the Armenian Genocide, historian Ara Sarafian discusses the 1917 report in light of other Ottoman records. He presents Talaat's statistics in all detail and includes two invaluable color maps demonstrating the content of the report, as well as additional Ottoman documents related to the Armenian Genocide. Sarafian presents Talaat's breakdown of the number of Armenians, their native provinces, and their whereabouts in the Ottoman Empire in 1917.