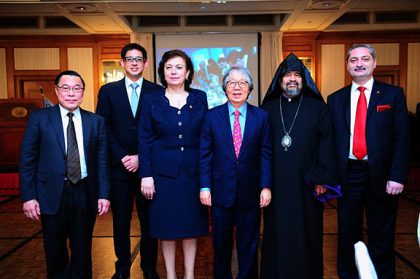 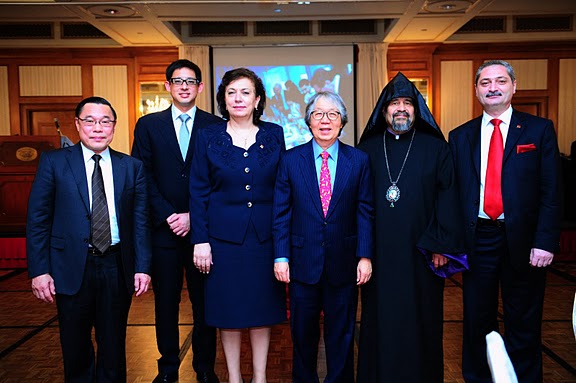 Singapore's Foreign Minister: The small Armenian community is a jewel in our country?s crown.

Minister of Diaspora Hranush Hakobyan participated in the celebrations dedicated to the 175th anniversary of the Armenian Church of St. Gregory the Illuminator in Singapore and the formation of the Armenian community

On the morning of March 26, Hakobyan visited sites that are part of the history of Armenian community in Singapore. In addition to the church, the history of the Armenian community of Singapore includes the Armenian Street, the well-known Raffles Hotel, which is one of the most significant, historic structures in Singapore, the street named after the hotel?s founders-the brothers Sargis (Sargsyan), the Straits Times English daily newspaper (established by Khachik Movses in 1845), the national flower of Singapore (Miss Vanda Joaquim, which is named after Armenian botanist Ashkhen Hovakimyan or Agnes Joaquin, who created that hybrid-orchid), as well as the Galistan and Ment Martin Streets.

On the same day in the evening, Minister Hakobyan participated in a reception held at Raffles Hotel (see photos), which ended with European and Armenian classical music performed by Armenian musicians. Attending the reception were representative of His Holiness Karekin II, Catholicos of All Armenians, Archbishop Voskan Kalpakyan, leader of the Diocese of the Armenian Apostolic Church in Australia, Archbishop Aghan Paliozyan, Chairman of the National Preservation Board of Singapore Tommy Koh, Armenian Ambassador to Singapore Armen Sargsyan, members of the board of trustees of the Armenian Church of St. Gregory the Illuminator of Singapore and others. There was a total of over 160 Armenians from 14 countries, including 40 representatives from the Armenian community of Singapore.

On March 27, Minister Hakobyan participated in a liturgy served at the Armenian Church of St. Gregory the Illuminator. Over 160 Armenians from 14 countries have arrived in Singapore to take part in the events. Among the participants was Singapore?s Minister of Foreign Affairs George Yon. After the liturgy, Minister Hakobyan, Armenian Ambassador to Singapore Armen Sargsyan and Singapore?s Foreign Minister George Yon made their welcoming remarks. Singapore?s Foreign Minister particularly underlined that “the Armenian church is an important part of Singapore?s heritage, and the small Armenian community is a jewel in our country?s crown.”

The Armenian Church of St. Gregory the Illuminator is one of the oldest Christian churches in Singapore. In 1973, it was officially acknowledged as a national monument by Singapore?s National Preservation Board.

There are nearly 80 Armenians living in Singapore. Despite the small number, the number of Armenians has grown and an Armenian Sunday school has opened in the past five years. In her speech, Minister Hakobyan pledged to support the development of the Armenian Sunday school, called on the Armenians of Singapore to become active participants of the pan-Armenian and regional projects implemented by the Ministry of Diaspora and engage in all spheres of the Armenia-Diaspora partnership.

THE Armenian community in Singapore celebrated the 175th anniversary of its church on Sunday, with more than 160 Armenians from 14 countries flying in to attend the festivities.

The Church of St Gregory the Illuminator in Hill Street is Singapore's oldest Christian church, and was gazetted as a national monument in 1973. To mark the occasion, the trustees of the church organised a gala dinner on Saturday at the Raffles Hotel – a uniquely Singaporean landmark that was started in 1887 by Armenian brothers Tigran and Aviet Sarkies.

On Sunday, a holy mass at the church was officiated by the Archbishop of Armenia [Reference to the leader of the Diocese of the Armenian Apostolic Church in Australia, Archbishop Aghan Paliozyan / Azad-Hye], who flew down for the event.

Speaking to The Straits Times after the event, Foreign Minister George Yeo, who also attended the mass, said the Armenian church and community were an important part of Singapore's heritage.

There are around 80 Armenians living here. Though small in number, the community has doubled over the past five years, mostly due to immigration from Armenia. About 10 Armenians have also been born here in the last two years.

Website of the Armenian Apostolic Church of St. Gregory the Illuminator in Singapore: http://armeniansinasia.org/