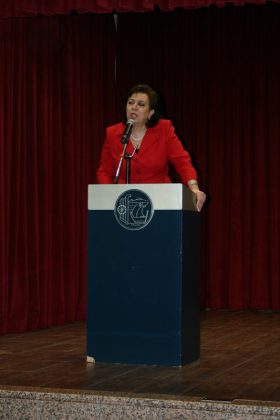 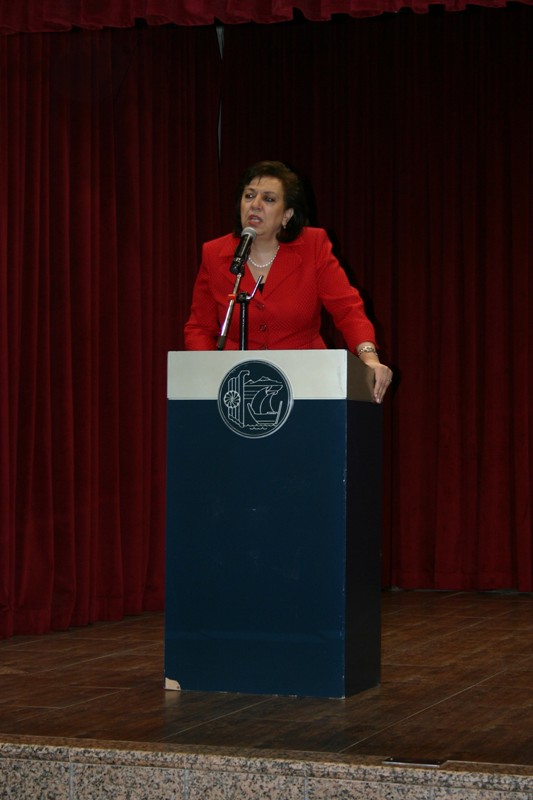 On the way to Singapore, Minster of Diaspora Hranush Hakobyan made a stop in Sharjah on 23 March 2011 and met with about 70 Armenians in the community center. Sharjah, where most of UAE Armenians live and where the church and community center is located, is 10 kilometers away from Dubai.

The Minister thanked the audience for attending the event after their lengthy working day.

Here are excerpts from the Minister's speech:

– The world is changing quickly. Our three entities Armenia, Artsakh and Diaspora need to face the new challenges. Artsakh is pouring blood everyday to protect its borders. Armenia is struggling to build a new and modern state, while Diaspora is struggling to preserve its national identity.

– In recent years we have adopted a serious policy towards the Diaspora. The first step in this direction is the declaration of Armenia as the homeland of all Armenians. An Armenian is defined whoever considers himself/herself Armenian. Due to historical circumstances we have great number of people who do not speak the mother tongue. We have obligation to consider them Armenian and to include them in our plans. The seven million Armenians who live abroad have now the constitutional right to apply for citizenship of Armenia and to be holders of duals citizenships.

– A new concept is taking roots in our relationship with Diaspora. Until recently Diaspora was seen as source of financial benefaction. With the help of Diaspora we managed to reconstruct the areas devastated by the 1988 earthquake, we managed to overcome the Turkish blockade and to take the first steps in our economic revival. The new approach that we would like to adopt is to consider Diaspora Armenians as potential investors and economic partners not only as benefactors. Diaspora Armenians must be able to do business in Armenia and gain profits. Investing in Armenia means the creation of jobs and the betterment of living conditions for the residents.

– We have noticed that Armenians living in different regions, such as the Middle East, Europe, Russia, etc., have unique characteristics which distinguish them from the other Armenians. We understand now that we need to develop different approaches and programs according to each region.

– To recognize, to trust and to cooperate: these are the three steps that can be at the core of Armenia-Diaspora relations. We know that Armenia and Diaspora do not know one another well enough. We need to accelerate the recognition process. Recognition leads to trust and trust leads to cooperation.

– Naturally, the major issue in Diaspora is the preservation of the Armenian identity. One of the programs in this respect is Ari Tun (Come Home) program where young people visit Armenia and get hosted by Armenian families. One third of the participants of this program are children of mix marriages. This helps enormously in strengthening their Armenian identity.

– Another issue that worries us is the information security in this age of mass communications. Although we are winners in the Karabakh war, we need to strengthen our victory by winning also the information war. Our neighbours are very active in falsifying history. Nevertheless, we managed in November 2010 to organize a media conference in Stepanakert, Karabakh with the participation of 200 media representatives, where we discussed information security issues and how to enhance the Armenian online scene.

– I would like to ask Gulf Armenians to get involved in the Ari Tun program. We have 800 participants this year. The participants (from 13-20 years old) live in selected families in Armenia. They pay only their airline tickets. This is a brilliant program that can make a difference in your communities.

– Another program worth mentioning is “Our Great Men“, through which many of our prominent men and women are honored. We are undertaking also programs of re-education of school teachers of Armenian language. Another program worth mentioning is the preparation of young community leaders. Also we have published 23 titles of books for Diaspora schools some of them appear in the electronic library. We have launched an online program for translating words and phrases from Armenian to other languages.

– We have organized 11 professional conferences in 2010 (journalists, architects, lawyers, etc.). This is a strong bridging factor and a way of classifying our capabilities. We have done also post-conference follow-ups through working groups. An example is the involvement of the architects in the production of the “City of the World” project in Shanghai Expo.

– We are also keen in updating our news and activities online through two websites (Hayernaysor.am and the Ministry's official website mindiaspora.am). Haylour has news broadcast in Western Armenian. We have prepared series of documentaries on Armenian communities.

– We have four pillars: Language, family, culture and church, without which we will face assimilation. Diaspora should be Armenia-oriented and should feel that it is part of the process of strengthening the state of Armenia, because if the state of Armenia is strong Diaspora has more chances to remain Armenian.

– There is a view that we Armenians are not united or organized. This is not completely true. We live in many countries and are influenced with many cultures. We have different lifestyles and way of thinking, but we have many topics that unite us, such as Karabakh independence, Genocide recognition, strengthening Armenian statehood, language, church etc. We need to be active in the domains that unite us.

– My last word is: Let us all work in a united spirit so that the dream of Armenia becomes reality and embraces all of us.

The Minister presented the community an album of the 288 Armenian Genocide monuments from all around the world, including the Sharjah Khachkar.

1) The main questions were about repatriation issues, administrative difficulties related to opening business in Armenia especially for Diaspora Armenians, the laws and regulations, the pitfalls that need to be avoided, etc.

2) Dual citizenship issues: Minister Hakobyan said that names and surnames in Armenian passports for dual citizenship holders are now recorded in the form that the applicants find it suitable. In the past Eastern Armenian transliteration was used based on the applicant's Latin name and surname. This has resulted in hundreds of deformed Armenian names and surnames. Azad-Hye had campaigned in favor of this amendment. The Minister assured that the citizenship applying process will be simplified. Only few documents will be required. The process itself will take a maximum of four months instead of one year. Police clearances from original countries with which the applicant has lost contact would be not be required.