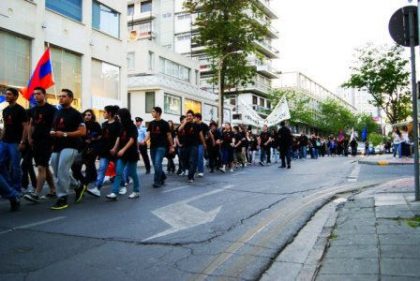 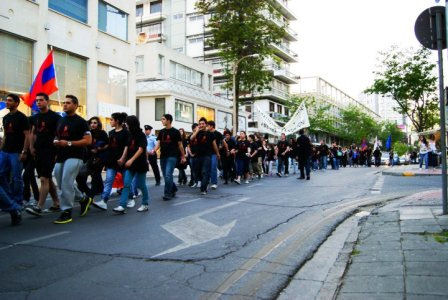 ?Stand therefore, having fastened on the belt of truth, and having put on the breastplate of righteousness,? Ephesians 6: 14

Young boys and girls from the Armenian community in Cyprus started their march from Elephtheria Square, downtown Nicosia, at 6:30 pm on April 23. They came from different families and attended various schools in Cyprus. That was not a concern at all. Neither were they worried about each other?s political or church affiliations. All that they wanted to do was to commemorate the 95th anniversary of the Armenian Genocide.

They are fourth and fifth generation survivors of the first genocide of the 20th century; nevertheless, they were all determined to carry on with this march. It was not a fun march, nor a young people?s serenade. It was a march for the truth, a march for their nation?s martyrdom. It was a march to show their determination to attain righteousness and justice for all that their nation had lost and suffered for.

The young boys and girls made their way through the main streets of Nicosia to the juncture of Armenias Street, opposite the Melkonian educational edifice. This was the meeting place with the adults. We could see the shining young Armenian faces with eyes full of compassion for the victims and passion for truth and righteousness. Their chants and banners were heard and seen by everybody along the streets. It was as if history was walking with them and encouraging them to move forward. Yes, to persist and move forward on the road that will eventually lead to truth and righteousness.

The adults joined the young and continued their walk together through Armenias Street. You could hear only one voice. It was neither the voice of the young nor the voice of the old. It was the voice that had only one label: Armenians of Cyprus. History was walking through Armenias Street. The voice of the marchers and the accompanying echoes reflected the community?s determination to move forward. It was a real walk in today?s time, where we could feel and live the heartbeat of the small yet vibrant Armenian community in Cyprus, the heartbeat that has joined the minds and the souls of ALL Armenians in Cyprus to stick to what Apostle Paul wrote saying to the
Ephesians, ?Stand therefore, having fastened on the belt of truth, and having put on the breastplate of righteousness?.

We still have a mission. We are still marching. This march cannot tolerate fatigue. On the contrary, it needs energy. The march needs the passion and the compassion of the young and the old. Most of all, it needs the pan-Armenian strategy and determination to finish the march for truth and righteousness.

Published in Azad-Hye with permission

Photo: From the 24 April 2010 march in the capital of Cyprus Nicosia