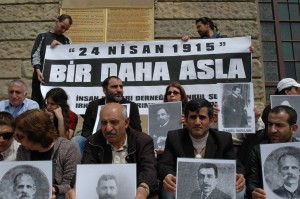 If you were one of the few hundred people in Istanbul who publicly commemorated the Armenian Genocide on April 24, 2010, you probably heard the sound of footsteps.

Daniel Varoujan – the prominent Armenian poet who was arrested on April 24, 1915 and eventually killed, like hundreds of his fellow Armenian intellectuals?said in one of his poems that he could ?hear the footsteps of a rose-flooded dawn? of victory. From a distance of 95 years, you, dear friend, were probably were hearing the sounds of the very same footsteps.

And the sounds of footsteps were gradually becoming louder.

The footsteps of Varoujan?s rose-flooded dawn of victory. The victory of memory over amnesia, affirmation over denial, and action over indifference. 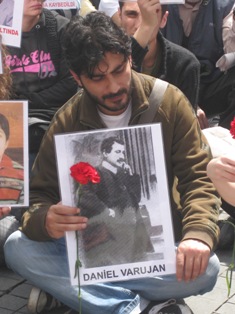 For all that your work, your life, and your murder means to me. And I, too, heard the footsteps.

The Turkish version of this article appeared in this week?s issue of Agos.

1) Activists holding photos of murdered Armenian intellectuals during the Genocide commemoration at the Haydarpasha Station in Istanbul on 24 April 2010. (Photo by Mujgan Arpat)

2) An activist holding Varoujan's picture at one of the commemoration events in Istanbul on 24 April 2010. (Photo by Khatchig Mouradian)