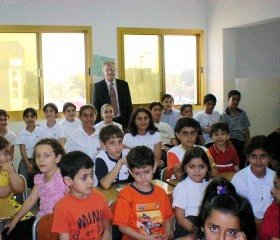 Azad-Hye, , 25 January 2006: In a special Message, His Holiness Aram I, Catholicos of Cilicia, announced 2006 to be the “The Year of The Armenian School.”

The Message which will be read in all the dioceses in the coming weeks refers to the mission of the Armenian school, considering it a stronghold for the Armenian nation and the focal point of the Armenian community life.

In the second part of the Message, I describes the efforts for strengthening the Armenian school as a national obligation for individuals, parents and national bodies.

He particularly pointed out the need for creating a new educational system, reorganizing the existing one, building new schools, trying to balance the budget and working hard especially on re-qualifying teachers.

An imminent problem is the quality of the teachers employed in the Armenian schools. Due to limited salaries and the obvious absence of long term planning, specially in the field of pedagogic needs, the Armenian schools are being manned with under qualified female teachers (male teachers are non-existent species), with high turnover rates. The number of students who are financially supported to take graduate studies in humanitarian subjects is very low. Also opportunities in front of those who have undertaken the pain (with the financial aid of their parents) to do such studies are severely restricted.?