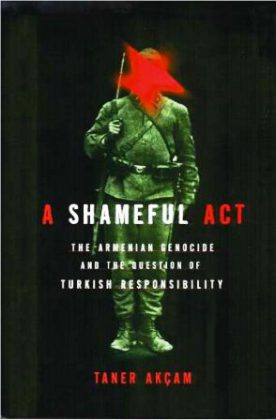 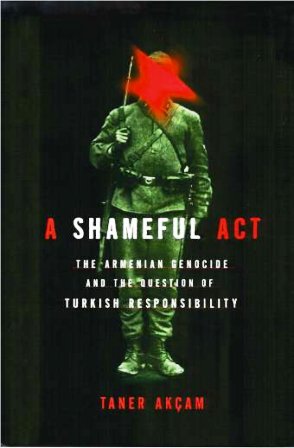 Nobel Laureate calls it ?the definitive account of the organized destruction of the Ottoman Armenians?

The Zoryan Institute announces the release of a new book by Prof. Taner Ak?am, A Shameful Act: The Armenian Genocide and the Question of Turkish Responsibility.

Ak?am draws the title of this book from a statement by Kemal Ataturk, father of the modern , who, in a closed session of the Turkish Parliament on April 24, 1920, described what the had done to its Armenian citizens as ?a shameful act.?

Nobel Literature Prize winner Orhan Pamuk, who was indicted in Turkey for saying ?30,000 Kurds and one million Armenians were killed in these lands?? stated, ?A Shameful Act is the definitive account of the organized destruction of the Ottoman Armenians, written by a brave Turkish scholar who has devoted his life to chronicling the events. No future discussion of the history will be able to ignore this brilliant book.?

The October 21-27 2006 issue of the Economist observed, ?This timely and well researched book by Taner Ak?am? highlights at least two things. First, how many foreign observers of the deportations, including Germans and Austrians who were allied to the Turks did conclude that the intention was to kill, not just deport. And secondly, the book helps to explain why the conditions in which these events might be freely discussed in have never quite fallen into place.?

??One of a handful of scholars who are challenging their homeland?s insistent declarations that the organized slaughter of Armenians did not occur,? said Belinda Cooper of the New York Times, ?Ak?am is the first Turkish specialist to use the word ?genocide? publicly in this context. His work?is breaking new ground.?

Taner Ak?am dedicated A Shameful Act ?to the memory of Haji Halil, a devout Muslim Turk, who saved the members of an Armenian family from deportation and death by keeping them safely hidden for over half a year, risking his own life.? In the preface, he explained that he first heard the story of Haji Halil ?from Greg Sarkissian, President of the Zoryan Institute, when he delivered a paper at a conference in in 1995. Eight members of his mother?s family were kept safely hidden?? by Haji Halil. He continued that he was ?deeply moved by the story, by the humanity that triumphed over evil and by the fact that an Armenian could find in his heart to praise a Turk, in a public forum, for that humanity.?? Ak?am concluded his dedication by stating that Haji Halil?s ?courageous act continues to point the way toward a different relationship between Turks and Armenians.?

?The Zoryan Institute was involved in the English translation and revision of the book for publication, and there are plans for the book to appear in several other languages in the near future, including Hebrew and Armenian,? commented George Shirinian, Director of the Zoryan Institute.

Prof. Roger W. Smith, Chairman of the Academic Board of Directors of the Zoryan Institute, added that, ?the more such original and comprehensive works are published, the more Turkish society will be empowered with knowledge to question false narratives imposed by the deep state. Restoring accurate historical memory benefits not only Turkish, but also Armenian society, as it can act as a catalyst for dialogue.?

As negotiates to enter the European Union, Ak?am?s work is particularly important and relevant. Beyond its timeliness, A Shameful Act has been described by Prof. Erik Z?rcher as ?the state of the art in this field? and is sure to take its place as a classic and necessary work on the subject.

Taner Ak?am, a sociologist and historian, was born in Ardahan province, , in 1953. He was granted political asylum in after receiving a ten-year prison sentence in for his involvement in producing a student journal, which resulted in his adoption in 1976 by Amnesty International as a prisoner of conscience. He is the author of eleven scholarly works of history and sociology, as well as numerous articles in Turkish, German, and English. He currently teaches at the Center for Holocaust and Genocide Studies at the of and with the International Institute for Genocide and Human Right Studies, .