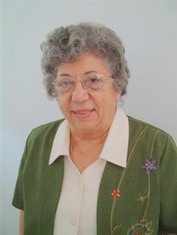 Mary Terzian, a local resident in and member of the Writers? Club of Whittier, is the winner in the Multicultural Non-Fiction category, for her first book The Immigrants? Daughter, published by Booklocker.com.

Terzian was previously awarded a PEN USA West, Rosenthal scholarship in 2001, while her book was in progress; first prize in Literature in the Armenian Allied Arts Association?s annual contests in 1992 and 1994; and recognition from various organizations for her writing (see www.maryterzian.com). She is a distinguished speaker with a ready sense of humor. “My Toastmasters Club was the back door entry to writing,” she chuckles.

Terzian, of Armenian descent, is fluent in English and calls herself “an imported American”. She lived the first half of her life in , and arrived in the in the 1960s, after spending time in the Republics of Congo and on assignment with the United Nations, and in . She is well traveled, sometimes running into complex situations such as the demise of Khrushchev while visiting the in 1964. She lived, studied and worked in and , and took advantage of early retirement from a left-brain occupation to pursue writing. Her sideline activities include contributions to ethnic and American newspapers, magazines, books and online publications. She held several offices in professional and service organizations.

“The Immigrants? Daughter” is the universal story of a displaced family, victim to ethnic cleansing, going through the phases of acculturation and adaptation with inherent problems of starting a new life in a foreign country.  It is “an easy read, not without its humorous moments…” per one reader; “captivating, heartwarming and unforgettable” per Richard R. Blake, in the August 2006 issue of the Midwest Book Review; “a compelling memoir” per Susan Wittig Albert of Story Circle Reviews; and “a fine job… reads more like a collection of short stories…” per Danielle Feliciano of Reader Views.

The book has generated five-star ratings on Amazon.com. It is available in paperback in regular or online stores and it is downloadable from the publisher, Booklocker.com.

Source: Press Release by the Writers? Club of

Read report in Azad-Hye about Mary Terzian and her book: http://www.azad-hye.net/news/viewnews.asp?newsId=734dz67

Chapter twenty-eight of “The Immigrants' Daughter”, 2005: