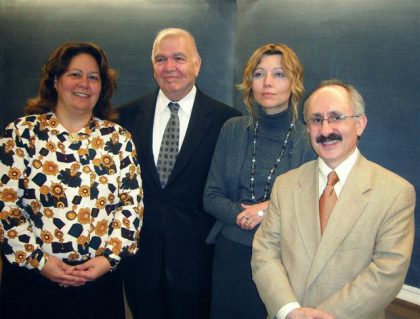 ?On Sunday afternoon, November 6, 2005, an extraordinary forum titled ?Three Turkish Voices on the Ottoman Armenians? took place at UCLA. Organized by Professor Richard Hovannisian and sponsored by the UCLA Armenian Educational Foundation Chair in Modern Armenian History with the support of the Center for Near Eastern Studies, the program included?Dr. Taner Ak?am, of ; Dr. Elif Shafak University of Arizona; and Dr. Fatma Muge Go?ek, . Featuring an exclusively Turkish panel, the forum generated great interest among students, academics, and the public. More than 800 people arrived at an auditorium that has a normal capacity of 375 but was crammed with more than eager 500 attendees who spilled over into the aisles, vestibules, and all available floor space. Fortunately, an adjacent auditorium was soon opened to accommodate most of the remaining overflow crowd, which was able to listen through a live audio link and to meet and hear the participants directly after each had spoken in the first auditorium.

Dr. Hovannisian noted that this was not only a record-breaking event but also a historic occasion, as three scholars had come to challenge the Turkish states narrative of denial by openly addressing the fate of the Armenian population of the . He stated: ?I am most grateful to Professors Ak?am, Shafak, and Go?ek, who understand that the topic at hand is not only one that is an Armenian issue but one that is equally a Turkish and a humanitarian issue.?

Dr. Taner Ak?am discussed the value of the Ottoman archives for studying the Armenian Genocide. He insisted that the belief that nearly all Ottoman documents concerning the Genocide were destroyed by successive Turkish governments is a misconception. Although no proverbial smoking gun has been discovered to prove conclusively that the Young Turk government planned and executed the physical destruction of the Armenian people, there is extensive documentation relating to the genocidal intent of the regime.?Such documents include official papers and correspondences from the central authorities in Istanbul guiding and instructing regional party and administrative officials in the implementation of the mass deportation of the Armenians, the appropriation and distribution of Armenian property and assets, the special targeting and intentional maltreatment of the Armenian deportees, and the swift settlement of Muslim newcomers in the Armenian towns as villages, often within a few days after the Armenians were marched away. Such evidence demonstrates that the Genocide was carefully planned and carried out by the central government, which purposefully denied the deportees the protection and care?necessary for their survival.

Dr. Elif?Shafak expressed the need to look into the personal histories or micro-histories of people whose lives were changed and destroyed by the calamity.?With the passing of time and the gradual disappearance of victims of and witnesses to the massacres, Turks and Armenians tend respectively to view each other as one monolithic accuser or as a homogenous group of perpetrators.?Focusing on the lives of individuals immediately affected by the brutality, however, puts a personal face on the victims. Shafak presented the example of Zabel Yessayan, an Armenian author from Constantinople, whose early works expressed her belief that Turks and Armenians were able to live together as citizens of their common homeland–the .?As relations between the two groups deteriorated into massive elimination, however, Yessayan was stripped of her optimism. Her post-genocide writing reflects the complete shattering of her vision of a symbiotic relationship and a free multinational existence.

Dr. Shafak explained: ?In focusing on Zabel Yessayan, I not only wanted to put a personal face to the collective pain inflicted on the Armenian people in 1915 but also to show that the Young Turks saw the Armenian intellectuals as a danger, and this was the reason that they suppressed and silenced them first. Just as important, my question is why and how Turkish and Armenian intellectuals have failed to collaborate in the past and how can they overcome this sad legacy to work together toward reconciliation??

Dr. Fatma Muge Go?ek discussed the conference on Ottoman Armenians that took place in in September.?The programs of that conference which she distributed showed the wide range of topics addressed by the participants, all of whom were, as the organizers intended, were Turkish citizens. She illustrated the difficulties faced by organizers and participants.?Certain government circles attempted to prevent the convening of the conference, which had to be postponed from its originally-scheduled date in May to September, after an international storm of protest gave great visibility to the event. Even in September, legal challenges were made to prevent the opening of the conference, but fortunately the organizers used loopholes to circumvent the courts. The conference received thorough, mostly negative, coverage in the Turkish media. The tacit support of certain individuals in the Turkish government and the positive reactions by some members of the Turkish press, however, show that at least some influential persons seem to be taking a positive stance toward the liberalization of Turkish society and the freedom of expression. The organizers and almost all participants in the September conference came away with deep emotional satisfaction and hope.

After each speaker, the audience submitted written questions and at the end of the forum the speakers again addressed specific points that had been raised. All Three Turkish Voices received sustained applause from a riveted, highly appreciative audience.? Encouraged by the unprecedented turnout and active discussion session, Dr. Richard Hovannisian suggested that further conferences and lectures may be in order to explore further and develop the themes and issues considered during the forum.