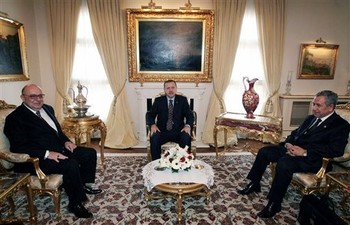 To minimize the damage caused by his threats to deport Armenians working illegally in Turkey, Turkish Prime Minister Recep Tayyip Erdogan met with what his office called the leader of the Armenian community in Turkey on March 26.

Except, that person does not represent the Armenian community nor its institutions.

Berdos Sirinoglu, the president of the board of trustees of the Armenian Holy Savior Hospital, told reporters after talks with Erdogan that no good could come out of bringing up what happened a century ago and that there were losses on both sides as Turks and Armenians fought ?among friends.?

?This was 100 years ago. There is no point in digging further into the past. I cannot understand why some people try to keep it [the debate] open,? added Sirinoglu, who said his own grandfather died in the 1915 events. ?There is no need to call the events genocide either.?

Angered by these statements and the apparent effort to unilaterally represent and speak for the Armenian community of Turkey, the relatives of slain journalist Hrant Dink kicked off a petition Tuesday distancing themselves from Sirinoglu and his comments.

The petition entitled ?We live in a different Turkey,? has received wide support and prompted a wave of protests by Armenians in Turkey, who say that Sirinoglu and his vice-chairman Herman Baloyan, who also attended the meeting, do not represent or speak for the community.

?Sirinoglu is not the leader of Turkey?s Armenian community,? said the petition announcement, reported the Istanbul-based Agos newspaper.

Sirinoglu ?is the president of the Holy Savior Hospital and that position does not give him the right to make announcements on behalf of the Armenian community. Thus, Sirinoglu?s announcements only reflect his personal opinions. We expect those who are creating confusion in the community to immediately correct their mistakes,? added the announcement.

?Hearing Sirinoglu?s announcement that ?Armenians feel safe in Turkey. Have you ever heard any complaints from them?? prompts us to think that perhaps we live in a different Turkey,? the protest petition said.

?Sirinoglu may feel safe in this country. But, that?s a lie,? added the petition, which goes on to stress that Armenians in Turkey are subjected to racial and ethnic discrimination and are being used for political goals.

?We expected Sirinoglu to remind the prime minister of the murder of Hrant Dink three years ago and demand that those responsible are brought to justice,? emphasized the announcement.

Srinogu said most of the 1.5 million Armenians who were living in Anatolia when the killings began had migrated to other countries ? Lebanon, Syria, Iraq, the United States, France and others. ?I am not saying nothing happened, but there is no benefit in digging deeper into the past. If we do this, our future will remain in the dark,? he said.

The protest petition blasted the efforts by Sirinoglu to deny the Armenian Genocide, stressing that the only way to confront the past is to face it.

In his remarks, Sirinoglu went as far as taking the blame for the inflated figure of 100,000 announced by Erdogan in his threat.

?We gave the figures to the prime minister. Since he trusted us deeply, he did not check it with other sources. We apologize for this,? said Sirinoglu, adding that the correct figure was about 20,000.

?Sirinoglu?s apology for the inflated figures raises suspicion. We believe that all of this was staged and a coordinated effort to portray the Turkish government as a benevolent entity,? said the protest petition.

?We condemn the prime minister?s announcement and express that we do not share Bedros Sirinoglu?s views,? said the petition, which also called on Erdogan to issue an apology.