“Armenia ? Diaspora Relations, 20 Years Since Independence” is one of the series of reports recently released by Policy Forum-Armenia.

Policy Forum Armenia (PFA) is an independent professional non-profit association aimed at strengthening discourse on Armenia's economic development and national security and through that helping to shape public policy in Armenia. Today, The PFA is the only nation-wide independent professional organization with an objective of improving policy design and conduct in Armenia.

The report calls on Armenia and Diaspora to seek to reclaim common philosophical ground that has been eroded by political/civil upheaval of 2008 and by the ongoing debate of Armenia-Turkey rapprochement.

The report sheds light on a number of challenges facing the Armenian authorities and Diaspora, which demand a unified response and that the time is ripe for a change. It attempts to leave very few stones unturned. It goes beyond slogans and takes very little for granted. In particular the report is critical of successive administrations in Armenia since independence by saying that ?The successive administrations in Armenia since independence have effectively stripped the nation of the rewards for its victories: the modern-day examples of audacity, perseverance, and success of unseen proportions.?

With respect to Diaspora, the report provides the following: ??While the promise and the hope continue, many questions have arisen around the practical implementation of various efforts to ensure economic, social, and political viability. Twenty years after Armenia?s independence and despite all its efforts, the Diaspora is yet to see a meaningful change in Armenia, one tied to, and be driven by, a modern developmental vision?. The report also argues for bringing the relationship between the two halves of the nation closer to its true potential. 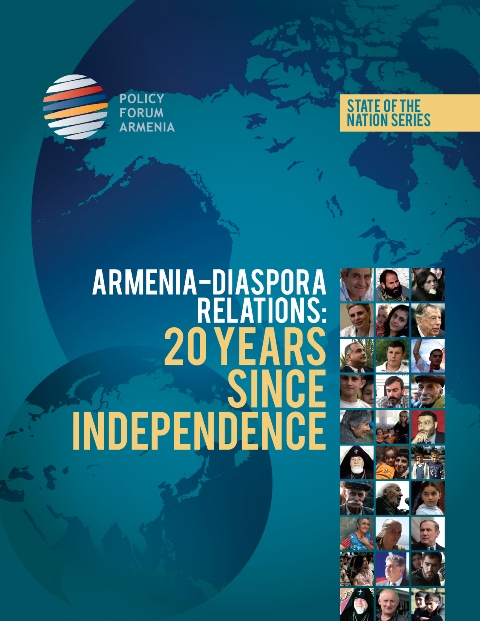 The report looks into the reasons behind this outcome, highlighting both the areas of collaboration and sources of tension between Armenia and the Diaspora since independence and focuses on the notion of and a mechanism for collective action for going forward.

In conclusion, the Report stresses that ?in an age of globalization and transnationalism, when physical borders are less significant and networks are becoming as important as any other ingredient of economic development and national security, Armenians around the world have a clear comparative advantage. With some innovative thinking, liabilities can be turned into assets and the nation can again be as united as it wants to be …?

For a PDF of the report and video of the recent forum go to: www.pf-armenia.org. Or click the PDF icon (870KB).

If you would like a bound color copy of the report, please send $20 payable to: 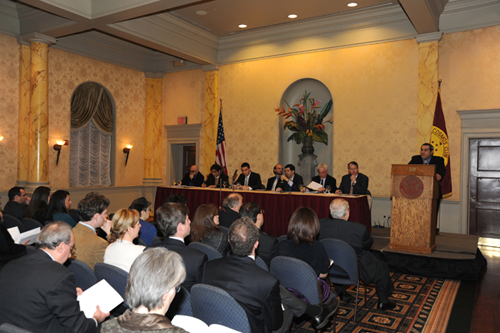 Armenia-Diaspora relations have never been more strained in the 20 years since independence. To provide an opportunity for academics, policy practitioners, and the public to discuss perspectives on, and approaches to, the present-day challenges facing the Armenian nation Policy Forum Armenia held its 2nd Annual Forum in Washington, DC from 28 February to 02 March 2010.

In it's first high level Economic Forum, PFA brought together an unprecedented line-up of academics and policymakers from Armenia, Russia, Turkey, Ukraine, and UAE, including Armenia?s five former Prime Ministers, to discuss the implications of the crisis for Armenia and help devise policy prescriptions to mitigate them.