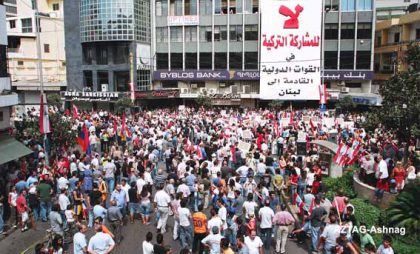 The objection of the Armenians of Lebanon to the engagement of the Turkish forces in is receiving local and international attention.

An Associated Press (AP) news report (published on 01 September 2006) refers to the aspirations of some Turks, who “remembering the glory of Ottoman times … may see engagement in the peacekeeping force as a chance to reassert Turkish influence in the and win favor with the West“.

Many parties including Europe, the and are eager to see Turkish forces in as a sort of Islamic contribution to the peacekeeping forces there. On the other hand, , nostalgic for the glory of the six centuries Ottoman presence in the is not hiding its ambitions for such a “prestigious” role.

“ has an obligation as a regional power and the old guardian of the to exert its positive influence on developments,” editor in chief of “The New Anatolian” (Turkish publication) said. This self described guardianship can cost a lot to the people of the region, as in the case of , which was partly occupied since 1974.

“Let's not forget: If we shut our doors, we can't escape the flames that are surrounding us,” Turkish Prime Minister Erdogan declared on Turkish TV in an effort to create a sense of awareness around the issue.

AP mentions that the Armenians make up about 4 percent of the country's population and they have come out against Turkish participation.

“Of course I wouldn't want them to come to ? not because they are Turks but because they have strong relations with and they occupy a part of ,” jeweler Manoog Minassian was quoted saying.

“International Herald Tribune” (IHT) posted an article on 6th September 2006 under the title “Lebanon, Armenians and Ottoman Turkey”, in which it points again to the fact that “some Turks see participating in the Lebanon peacekeeping force as a chance to reassert Turkish influence in the region, decades after their Ottoman Empire ruled across southeastern Europe, North Africa and the Middle East“.

An estimated 120,000 ethnic Armenians live in the country today – according to the same source, some 50,000 in alone.

The spiritual leader of 's Armenians, Catholicos I, released a statement calling Turkish participation in the peacekeeping mission “morally unacceptable,” and also warning Annan against the deployment.

Agence France Press (AFP) reports from Bourj Hammoud (08 September 2006): “Lebanon's Armenians, who have not forgotten the massacres their people suffered under Ottoman rule, demonstrated Friday against Turkish troops set to take part in a UN peacekeeping mission. Waving Lebanese flags and banners denouncing as a murderous state, several hundred gathered in this suburb heavily populated by Armenians and appealed to the United Nations to reconsider 's participation in an expanded UN force in . “Genocide, massacre, deportation: 's definition of peace,” read one banner. Another said: “No to the participation of Turkish forces among UN troops coming to “.

Representatives of the Armenian community, says AFP, have sent letters to UN Secretary General Kofi Annan and to Western embassies in urging them to reject Turkish participation in the UN Interim Force in Lebanon (UNIFIL) set to number 15,000 troops from various countries.

In many non-Armenians have expressed sympathy and solidarity with the Armenian position. Ex-Minister Talal Arslan, Head of the Democratic Party called on the Lebanese politicians and the Lebanese society to express support for the Armenians. In an announcement circulated on 9th September 2006 he underlined that “It is completely unacceptable to let the Armenians face alone this subject, which evokes painful memories for our Armenian brethren, who are a symbol for Lebanese national unity and civil tranquility and an example of openness towards all the components of the Lebanese society without exception. With our position [regarding the Turkish participation] we do not cultivate any animosity or rejection to our Turkish neighbors, on the contrary we encourage dialogue between them and the Armenians to overcome this painful page of the past and to build a civilized future, in which comprehension would prevail between the Turks and the Armenians for the benefit of the regional and international peace. We ask the Lebanese government to undertake its responsibilities and to listen to the outcry of sorrow by our Lebanese Armenian compatriots”, concluded Arslan

Banner in Arabic language says: “No to the Turkish participation in the international peacekeeping forces coming to Lebanon“