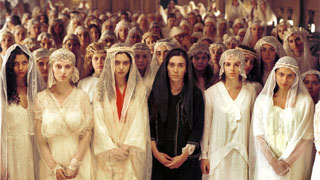 Original name of the film in Greek language: “Nyfes”

Tagline: It's not a punishment to remember someone you love. The punishment is to forget him.

Main characters (name in movie between the brackets):

Set in 1922, the movie depicts the story of 700 mail order brides from Greece, Turkey, Russia and Armenia traveling on the SS King Alexander to the United States of America. In their suitcases, they all carry a photograph of an unwelcome bridegroom and their wedding gown. Some see it as an opportunity to start a brand new life, while others are bound by familial duties. Most feel lost, depressed and homesick as they have to leave the comfort of their homes and family to marry a stranger.

The main characters are American photographer Norman Harris (Damien Lewis) and Greek dressmaker Niki (Victoria Haralabidou). He is frustrated and despondent after his latest wartime photos are rejected by the American newspaper he's working for. First Class passenger Norman becomes fascinated with the brides traveling in Third Class and after taking the captains portrait, decides to take portraits of the brides, all 700+ of them. One bride captures Norman in particular; Niki and they form a relationship during the voyage, which culminates with a heart-rending decision upon their arrival in America.

“Brides” is an epic and emotional journey that has attention to detail around every corner. There is always an immense feeling of actually being filmed in 1922, which allows “Brides” to have an ongoing atmosphere that is moody and sensual and very reminiscent of the era.

Read comments from viewers at: