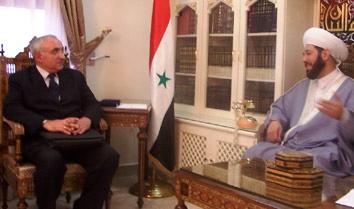 Azad-Hye, , 9 September 2006: Grand Mufti of the Republic of Syria Dr. Ahmad Badruddin Hassoun arrived in on 2 September 2006, at the invitation of the Catholicos of All Armenians Karekin II, to discuss issues of religious cooperation and dialogue.

During his visit, Mufti Hassoun held meetings at the Parliament, Foreign Ministry, as well as at the Faculty of Theology of Yerevan State University.

In a news wire by Syrian News Agency's (), journalist Ahmed Zahra reported that Mufti Hassoun stressed that is a country from which Christianity spread to the world. During a banquet given in his honor by the Armenian Catholicos he said that was also the country to which the Armenian people immigrated in the past and found amity and hospitality.

's Foreign Minister Vartan Oskanian who attended the banquet underlined that the visit of 's Grand Mufti is an expression of Arab friendship and strong willingness for enhancing the Islamic-Christian dialogue.

Oskanian said “I lived in (north of ) which received the Armenians in the past. We didn't feel aliens in that city. We also didn't face problems in the hospitable country of .”

For his part, Professor Vilen Hagopian, Member of the of Science, expressed gratitude to the Arab people who received and offered all available assistance to the Armenians during their time of crisis.

According to Pan-Armenian website Grand Mufti Hassoun attended the Memorial to the Armenian Genocide victims in , where His Eminence wrote a note in the Honor Book saying: “If all the peoples followed their religion there would be no pogroms. The Armenian people should overcome the pain, revive and build with peace”.

The speaker of the Armenian Parliament Tigran Torosyan held a meeting with Mufti Hassoun on 4 September 2006. The Catholicos of all Armenians Karekin II and Ambassadors of two countries were present at the meeting.

During the meeting, Speaker Torosyan pointed out the importance of the Mufti's visit to now that “the neighboring state's spiritual leader threatens with jihad.” [Reference was made to the leader of the Caucasian Muslims Allahshukyur Pashazade, who in a recent interview stated his readiness to declare jihad for liberating “'s occupied territories” when time comes].

Torosyan said “religions cannot be a factor of estranging peoples. There are high values uniting people and allowing them to meet challenges”.

In his turn, Mufti Hassoun, commenting the statements on jihad said that jihad means life, but not war and murders. Jihad unites people round good ideas, and spiritual leaders' task must be helping political leaders in establishing peace and prosperity, he added.

In this context, Parliament Speaker Torosyan stressed that just as jihad can have different interpretations inside one and the same religion, the term “democracy” could be interpreted in different ways. “Democracy is defined as a form of government giving people prosperity and protection. But there are individuals and groups making use of democracy for war, though good is not imposed by means of war,” Torosyan said.

On 7 September 2006 Catholicos Karekin II and Mufti Hassoun attended a joint press conference, during which Kerekin II underlined the importance of the current visit of the Mufti to . “We have to seek cooperation and build ties among religions as well as realize mutual understanding between representatives of religions,” the Catholicos said.

For his part, the Mufti emphasized the significance of bringing about a just solution for the central cause of . He denounced some forces linking the terrorism phenomenon with Islam saying, we must learn that practices perpetrated under religion's name or under any pretext represent only the practicing individuals and not the peoples.

On the same day Mufti Hassoun met with students of the Faculty of Theology of the . The University Rector, Archbishop Anushavan Jamgotchian, lecturers and students of the university met the high-ranked guest. The Mufti was happy in meeting the Armenian students and he made a comment saying: “ is rich in students and life adorning people”. He wished prosperity and success.

For his part, the Grand Mufti underlined the importance of cooperation among all countries and peoples to work to achieve peace in the world, pointing out to the strong relation connecting the two friendly countries and the importance of the role of the Armenian community in and its contribution to the development of the country. The two parts also touched upon regional issues, including the situation is , the process of the Nagorno-Karabakh peace talks.

Photo: Consul of in invites the Grand Mufti to visit (from a June 2006 meeting)