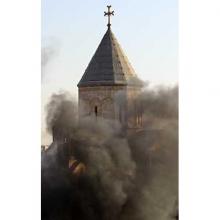 Thousands of Iraqi Armenians are looking for shelter in different corners of the world. The war has deprived their last hope for security and freedom.

Petros Aghababian, head of the of migration department dealing with the issues of the refugees, says that his department has no estimation about the total number of the Iraqi Armenians who have settled in recently, although this number, he admits, has increased in recent years.

Aghababyan maintains that the state doesn't help the refugees with housing, labor and other issues; it only gives them a legal permission to live in the republic for one year. Some of the refugees stay with their relatives and acquaintances whereas others live in rented houses.

Sevan Ohannesian, who formerly lived in , says that they led a normal life in before the war. He had his own business, owned a photo shop. He was the only one of his family who could settle in ; the other members are still in as they have certain problems connected with their passports.

Ohannesian says that he doesn't see any future in . He is going to find a job in and finally settle in the country with his family.

Araz, another refugee from , moved to two years ago and has already managed to get adjusted to the new conditions. He got a temporary passport and married an Armenian girl. He is not going to return to . He says he is displeased with the treatment there. Other members of his family are still in as they cannot sell their properties.

The usual place of social meeting of Iraqi Armenians in the Armenian capital is the Republic Square.