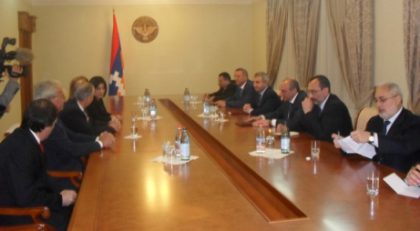 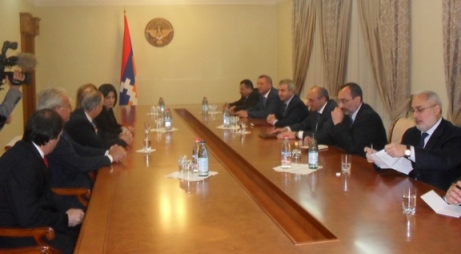 The speaker of the Uruguay Parliament Jorge Orrico visited Karabakh (Artsakh) and met with the officials and the people there.

In Stepanakert, the capital of Karabakh, Orrico was greeted by a great number of residents who celebrated this first ever high ranking visit by a foreign representative to Karabakh since the ceasefire in 1994.

“Visiting Artsakh is not such a bold move, it merely a step. We are friend with the Armenian people. We must especially stress the role the Armenian National Committee office plays in fostering Armenia-Uruguay relations,” said Ruben Martinez Huelmo, Uruguay parliament foreign relations committee member.

Karabakh President Bako Sahakian praised Uruguay's historic role as the first country to recognize the Armenian Genocide. From that point onward the process of international recognition of the Armenian Gencoide started. While in Armenia Orrico visited Tsitsernakaberd memorial monument and held meetings with Armenian officials.

“I am personally convinced that Nagorno-Karabakh is part of historic Armenia and it must be independent and in a short while be unified with Armenia. This is the only resolution to the Artsakh issue,” said Luis Almagro, Foreign Minister of Uruguay, during a conference organized by the Armenian National Committee of South America in Montevideo earlier this year.

“I'm honored to represent the country, which was the first to recognize the Armenian Genocide,” Orrico said, speaking at the Armenian National Assembly session in Yerevan, few days before transferring to Karabakh.

He pointed out to the similarities between Armenia and Uruguay, underlining the fact that they are both small states surrounded by large countries.

“We are the grandsons of those Uruguayans, who opened their hearts in 1915 to accept the persecuted peoples. We are honored to be the first to accept the Armenian Genocide by law. It happened on April 22, 1965. I would like to note that we have an Armenian Genocide museum in our country and every year on April 24 we hold commemorative events at the Chamber of Representatives. We are a piece of Armenia in South America,” said Orrico.