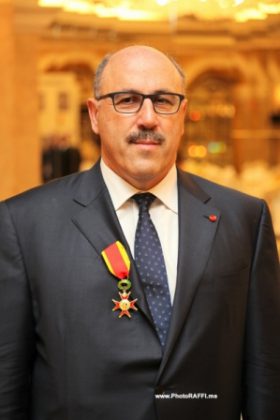 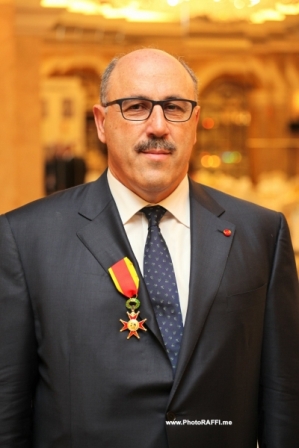 One of the main benefactors of the Armenian community in Sharjah, Varouj Nerguizian was awarded the Insignia of the Pontifical Order Knight of Saint Gregory the Great.

The award was bestowed by His Holiness Benedict XVI on 31 March 2013, in a special ceremony presided by Catholicos-Patriarch Nerses Bedros XIX Tarmouni (of the Catholic Armenian Church) and attended by Archbishop Kegham Khatcherian, Primate of Lebanon Armenians and Archbishop Goriun Babian, previous Catholicosal Vicar of the Prelacy of Kuwait and Arabian Gulf Countries.

In an interview with OTV a day before receiving the award, Nerguizian explained the conditions under which the Armenian Church in Sharjah was constructed. “The idea was initiated by Catholicos Karekin I and the church was inaugurated by Catholicos Aram I”, he said.

“Recently, Catholicos Aram I asked us to build a church in Abu Dhabi. Currently work is under way to construct this church. The objective is to complete it by November. The building will be a beautiful one”, he added.

Talking about his contribution to the Armenian public life in the UAE, Nerguizian stressed that “In every community there are persons that are considered as the pillars of the community. They cannot ignore their duties, especially as they are known in front of others to be representative and in charge of the community. I cannot ignore this reality and with this concept in my mind, I have been member of the committees from the start and continue to do so for the common benefit”.

Nerguizing underlined that community affairs are administered in a smooth way in the UAE and the committees and members do whatever they can to remain united.

He also mentioned his 12 years of dedicated work as Board member at Georges Pompidou Lycee in Dubai and his role in forming the Franco-Lebanese Educational and Cultural Association. Nerguizian is the Executive Director and General Manager of Bank of Sharjah, UAE since 1992.

As part of his activities he mentioned with great pride his contribution to the renovation of the Haghartsin  church in Armenia.

“The same morning when President Kocharian visited Sharjah Armenian Church, the roads around the church were repaired.  Dr Sheikh Sultan bin Mohammed Al Qasimi, Ruler of Sharjah, has been very caring towards the Armenians. Knowing this, President Kocharian invited Sheikh Sultan to visit Armenia, where His Highness was warmly welcomed. During a visit to Haghartsin he was toured around by an Arabic speaking Lebanese Armenian priest, who was serving there at that time. The communication was very easy through this priest. The Sheikh asked him why the church is not renovated. He said there is a relevant project, but there is no funding for that. The Sheikh undertook the renovation expenses and asked me to take care of the details. We cooperated with the Hayastan Fund and the project is complete now,” Nerguizian said.

Nerguizian is a permanent benefactor of Mesrobian College in Bourj Hammoud, Beirut. During the reception following the award ceremony, college principal Gregoire Kaloust said: “Honoring Mr. Varouj Nerguizian is not only a formal celebration and it never will be. We want to appreciate our conducts, in order to grant the example to the next generation to follow in their footprint with the same helpful, humanitarian and national pathway”.  In the end, he awarded Nerguizian with the school's sword, complementing the medal of the Pontifical Order Knight of Saint Gregory the Great.