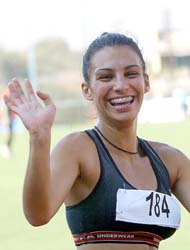 Four years on a mixture of personal misfortune and war has prevented it from happening.

She may be just 21 but the four years since Smith spotted her on the training track at the 2002 Busan Games have not been kind to Taslakian, whose descendants were Armenian and fled to during the 1915-17 genocide by the Turks.

Now her generation are discovering what it is like to be bombarded having come through the 34-day war between Israel and Lebanon-based Hezbollah in July which left a huge swathe of Lebanon destroyed and thousands dead.

“What happened was very dramatic in so we were not in the right frame of mind to train for this big event.

“Because of the war the Lebanese championships were cancelled so the Lebanese Federation sent us (with the help of governing body the IAAF) to where we stayed for three months and we worked on the technical rather than the physical areas.”

Taslakian, national recordholder in the 100, 200 and 400m, is realistic about her chances of success at the Games given her disrupted preparation.

Her ultimate goal is for an emotional triumph next year at the Asian Championships in .

“The Asian Games would be a fantastic preparation for the Asian Championships in next year,” said Taslakian, whose father inspired her to take the sport up aged 15.

“I cannot guess what my result will be here as I have not competed for a long time but I aim to beat my personal best in the 200m.”

Things looked distinctly rosier not only for Lebanon but also for Taslakian two years ago as she went to the Athens Olympics and was not disgraced while running a personal best in the 200.

She was rewarded by the IAAF with a nine-month scholarship to train in , with higher class facilities than she could ever hope for back home. But it didn't go as planned.

“It was originally a dream come true,” she said.

“I tried to make the most of my good fortune but I tore a calf muscle and couldn't do what I had in mind.

“The good side was that when I was fit I was able to compete with high class athletes but on the down side I didn't get the attention of the coaches because they prefer to focus on the star athletes.

“So I felt very alone without my family and friends,” added Taslakian.