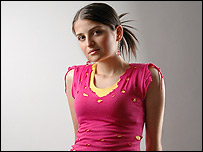 Armenian singer Silva Hakobyan has won the BBC World Service's “Next Big Thing” competition with her song “I Like”.

Her entry was composed by her sister Mane and produced by Edgar, her brother.

The BBC World Service's “Next Big Thing” competition searched for the best young unsigned band. The 17-year-old was chosen ahead of six other acts from around the world at the final, held in the BBC's Maida Vale studios in .

The judges praised “I Like” as “fresh and new” and described her performance as “second to none.”

“It's terrific, it's unbelievable to be in first place,” she said.

She added the comments from the judges (producer William Orbit described her as “fabulous”) meant she could “make the step up to international level.”

“I felt I succeeded – I did the best I could do. Many thanks to the BBC. It's terrific; it's unbelievable to be in first place,” she commented.

Second place in the competition was split between Malawian rapper NiC and duo Stefan and Mya.