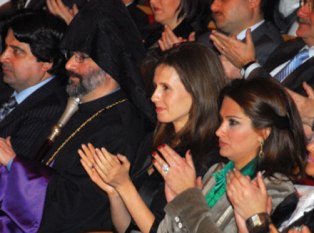 On 4 February 2007 the ?Aleppo Choir ? Zvartnotz? performed a concert in the Damascus Opera House, conducted by Artun Kalemkerian, accompanied by pianist Ruzan Barsoumian.

The 1st lady of Syria Asmaa Al-Assad, who was the guest of honour, warmly welcomed the group and highly praised their performance (see photos).

The concert started with an Armenian song ?My land? followed by ?Song of unity?, which was performed twice due to the beautiful interpretation by the singers. The concert ended with the songs ?Fi sabil al-majd – For Glory? and ?Suria ya habibati ? My dear Syria?.  The program also included Arabic patriotic songs with new musical arrangements. According to Kalemkerian the program was prepared in 4 months time including those songs that had new arrangements. ?We hope the audience liked them? he added.

It?s worth mentioning that the ?Song of unity? was performed for the first time in Armenia on 29 April 2006.  On Armenia?s independence anniversary everybody (including the President of the Republic) danced hand in hand all around the Armenian border. This dance got famous and was marked in the ?Guinness Book? as the longest group dance in the world. 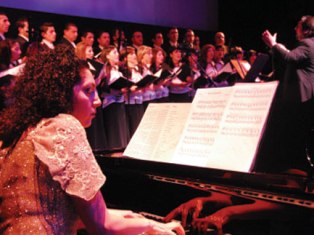 “Aleppo Choir ? Zvartnotz”: brief introduction
The choir consists of 40 members, 3 soloists, the pianist and the conductor Artun Kalemkerian. It was formed in 1969 and is considered one of the professional choirs in Aleppo. It has been one of the leading groups which presented Arabic songs arranged for choir performance in 4 sound levels.

The choir also paved the way in front of several amateur individuals into the world of professionalism like Hovsep Shitilian (conductor of several philharmonic orchestras in Europe), Talar Degirmendjian, Palig Kalemkerian-Popova (winner of several prizes in Armenia) as well as Artun Kalemkerian (the current conductor).

The choir appeared several times on Syrian TV and performed in Syria, Lebanon and Armenia.