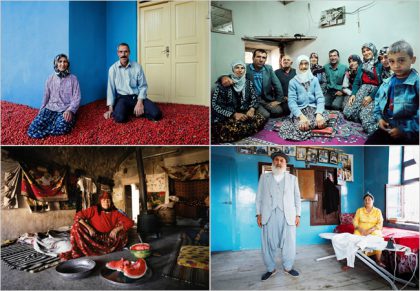 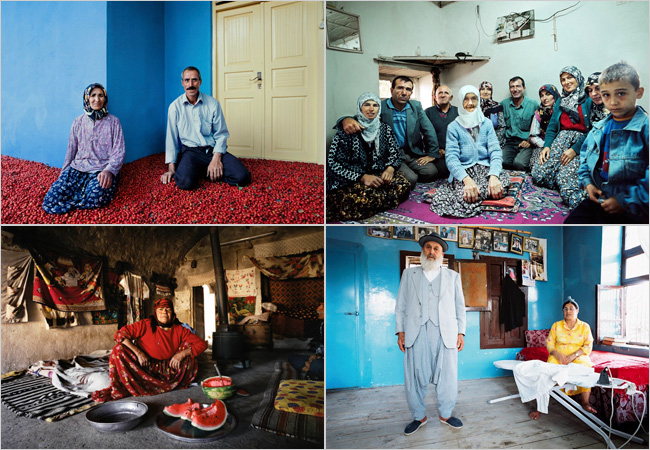 SAMSUN, Turkey ? When the word spread that they were coming, they were suspected of being missionaries. Then fugitives. But when the small band of Turkish intellectuals finally arrived at this Black Sea city in February, people seemed to understand that they really wanted only to tell stories.

The group ? a feminist (Kurdish), a writer (ethnic Armenian), an academic and a photographer (both Turkish) ? were presenting a book of photographs of people from Turkey.

The book counted 44 different ethnicities and sects across Turkey and captured their members dancing, eating, praying, laughing and playing music. If that sounds innocuous, it is not. For its 85-year history as a nation, Turkey has a very specific line on cultural diversity: Anyone who lives in Turkey is a Turk. Period.

Attila Durak, a New-York-trained photographer born in Turkey, compiled the book, traveling around Turkey for seven consecutive summers, living with families and taking their portraits.

His intent was to show that Turkey is a constantly changing kaleidoscope of different cultures, not a hard piece of marble monoculture as the Turkish state says, and that acknowledging those differences is an important step toward a healthier society.

?People see themselves in the photographs, and they realize they are no different,? said Mr. Durak, whose book, ?Ebru: Reflections of Cultural Diversity in Turkey,? was published in 2006. He said viewers reacted with: ?Those Kurdish people have kids who play together like ours. Look, they dance the same kind of wedding dance.?

Ever since Turkey became a nation in 1923, it has been scrubbing its citizens of identities other than Turkish. In some ways, that was necessary as a glue to hold the young country together. European powers were intent on carving up its territory, a patchwork of remains from the collapsed Ottoman Empire, and Muslim Turkishness was a unifying ideology.

But it forced families from different backgrounds, who spoke different languages ? Armenian, Kurdish, Greek, Georgian, Macedonian ? to hide their identities. Family histories, like the crushing events of Turkey?s genocide against Armenians in 1915, were never spoken of, and children grew up not knowing their own past or identity.

?Memories like that were whispered into ears behind closed doors,? said Fethiye Cetin, a lawyer who learned only in her 20s that her grandmother was Armenian. ?There was a big fear involved in this, so the community itself perpetuated the silence.?

It is that locked past that Mr. Durak and his colleagues seek to open. Their method is telling their own stories to audiences across Turkey as an accompaniment to exhibits of Mr. Durak?s photographs, to open a conversation about the past and to chip away at stereotypes.

The academic, Ayse Gul Altinay, an anthropology professor from Sabanci University in Istanbul, is a kind of national psychiatrist, identifying the most painful points from the country?s past and offering a new way to think about them as a route to healing.

She points to the regional art form, Ebru, the process of paper marbling that produces constantly changing interwoven patterns, as a metaphor for multiculturalism.

?We?re not a mosaic, different from one another and fixed in glass,? said Ms. Altinay, who earned her doctorate from Duke University. ?Ebru is done using water. It is impossible to have clear lines or distinct borders.?

In Samsun, a bustling city with a nationalist reputation, and the fifth in Turkey to see the exhibition, the audience was small but interested. The writer in the group, Takuhi Tovmasyan, talked about how she was gruffly banished from a piano recital hall after winning a competition, when teachers learned her last name, which is plainly Armenian.

?I hid this feeling for a long time,? said Ms. Tovmasyan, who has published a book of family recipes and stories as a way to open up a conversation about the past. ?But when I saw these photographs, I decided I needed to talk about it.?

The discussions have hit a nerve. At a presentation in Kars, in eastern Turkey, a man in his 50s in a suit spoke through tears about discovering that his family had been Molokan, also known as Russian Old Believers. It was the first time he was speaking publicly about it, he said.

Others have apologized emotionally to Ms. Tovmasyan. In Samsun, a young man in a white sweatshirt said, ?I personally apologize for ?Get out,? on behalf of all my friends,? eliciting applause. ?It?s really a terrible thing.?

Mr. Durak?s subjects look into his camera with a directness that is startling. A Jewish man sits in a chair in Istanbul. A gypsy in a flowered shirt plays the saxophone. A woman from the Black Sea coast stands in a doorway, her fingers touching her collarbone.

Each is labeled for ethnicity and sect, a categorization that initially struck local authorities here in Samsun as something close to seditious.

?They said, ?We have to investigate; maybe they are wanted by the police,? ? said Ozlem Yalcinkaya, an organizer from a student group, the Community Volunteers Foundation, who arranged the exhibit. ?I said, ?If they are fugitives, why would they be putting their names on the exhibition posters?? ?

In the end, authorities relented, and the municipality even allowed the use of its lecture hall.

?The genie is out of the bottle,? Ms. Altinay said.

She added, ?Too many people are interested in looking into who we are, who lived on this land before us,? for the healing process to be stopped.

A young woman in the audience echoed that thought, as she apologized to Ms. Tovmasyan. For as gloomy as the past was, the future was more hopeful, the woman said, because young people are much more flexible and accepting than the older generations.

?In a few years? time, a lot of people will be doing a lot of apologizing,? she said.

Photo: Attila Durak captured both the variety and similarities of cultures within Turkey in the photographs he took over seven summers, while living with families of different ethnic groups around the country.