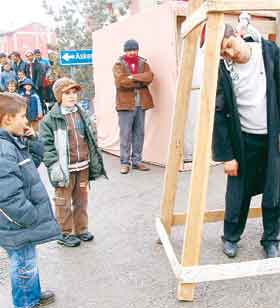 Celebrations in Aşkale, Erzurum, include workers dressed up as Armenians acting out hanging an imam and murdering a family before being killed themselves by high school students playing the Turkish militia. While the mayor defends the event as educational, experts, commentators and newspapers call for an end to such displays of animosity

The 90th anniversary of the liberation of the eastern province of Erzurum's Aşkale region was celebrated there Monday, with municipality workers ? in a staged event ? dressed as members of an Armenian gang sending the imam to the gallows, torching the mosque and bayoneting a doll in a crib, to the alarm of many locals.

The daily Sabah described the story as ?shocking? on its front page yesterday, and H?rriyet's headline read, ?The mentality in this day and age.?

The daily Radikal's front page headline was, ?This disgrace should end.?

Just like in previous years, celebrations continued with municipality workers dressing up as Armenians and playing out a massacre committed by Armenians over 90 years ago. The workers first sat around a table and drank alcohol ? actually cold tea ? before acting out torching the local mosque. Murat Billur, a barber who played the imam in the play, was hung from the makeshift gallows in the town square as he recited the call to prayer.

The workers then acted out the murder of a family and bayoneted a doll in a crib to screams from the town's children.

The play ended with Aşkale High School students, who played the Turkish militia that freed the town from occupation, attacking and ?killing? the workers.

Yaptırmış, of the ruling Justice and Development Party (AKP), defended the play. They repeat the event every year, he said, so children will always remember what happened. ?Keeping these sentiments alive will give us an honorable future,? he said.

?There are no bans. I don't think children will be affected adversely,? he said.

Municipality workers who played the Armenians said the mayor issued orders and they obeyed.

One worker, Celal Akar, said his family, friends and neighbors criticized him for playing an Armenian. ?Sometimes they even make fun of us. We don't want to be part of the play, but when the mayor says it we can't object. We have been doing this for at least 20 years,? he said.

The municipality is responsible for the organizing the event, but Şener was upset when he saw the play. ?Next year's celebrations will be without Armenians,? he said.

Burning and stabbing people in front of children is very harmful for young and impressionable kids, said psychologist Alanur ?zalp, speaking to H?rriyet. ?We all saw teenagers being exploited in the murder of Hrant Dink and priest (Andrea) Santoro. When asked, these teenage murderers said, ?He was Turkey's enemy. They told me to go and kill him.' Such scenes should not be repeated when we are trying to rid ourselves of the image of barbarian Turks,? she said.

Celebrations portraying Turkey's neighbors as enemies have ended in many regions in Turkey, said Erdun Babahan, editor-in-chief at Sabah, in his column yesterday. ?As long as your children grow up watching things like this, it will never be hard to find teenage triggermen to do bad jobs,? Babahan said.

Ekşi asked how teachers and parents could make their children, who were obviously shocked and scared, watch such scenes. ?Now do you see how those who murdered Dink and Santoro grow up? Now do you understand what Rakel Dink meant when she said, ?Nothing can be done without questioning how a baby can become a murderer,'? he said.

Photo: Local children are in shock as they gaze at the hanging barber playing the imam in Aşkale. DHA photo