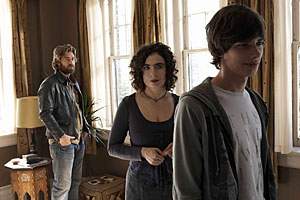 Just when we?ve got our heads around the kind of multi-stranded storytelling that defined films such as Crash and Babel, directors start throwing down all sorts of other gauntlets as if to ensure one?s trip to the cinema is as confusing as possible. Chronological order? At it with the scissors! Reality versus make-believe: why differentiate? On their own, such devices can work wonders, but all together, the results are befuddling. Such is the case with Adoration, the 12th feature film from the Canadian-Armenian director Atom Egoyan, who has made a name for himself tackling such profound issues as cultural and religious identity, the rise of technology and warped perceptions of reality.

The film?s premise is an interesting one: Simon (Devon Bostick), a high school student, is struck by a news story about a man who hid explosives in his pregnant girlfriend?s suitcase with the intention of blowing up a flight to Israel (it is based on a real incident in 1986 in which a Jordanian attempted the same thing but was discovered by the Israeli authorities, saving 380 passengers).

Orphaned at a young age and raised to believe his father was a monster, Simon chooses to place himself at the centre of this narrative, and, with the help of his French teacher, Sabine (Arsin?e Khanjian), develops it into a dramatic exercise, which his classmates swallow whole. Thanks to the internet, his story goes viral, inciting the online community to discuss at length (via videolink) the motives behind the bomber?s actions and the rationale of terrorism.

All is not as it seems, though, and soon Sabine?s real identity becomes clear. At this point, an interesting story about a confused young boy who uses technology to cultivate an alter ego turns into a family melodrama with Sabine at its centre. Not only that, but the religious debate takes on a stranger, more iconographic feel as Egoyan attempts to tackle the subject of tolerance in arty form.

The befuddlement starts to kick in when what Simon imagines to be the truth and the real truth cease to be separable. Egoyan explores the depths of his characters without ever explaining them: Simon?s uncle, Tom (Scott Speedman), who brought him up after his parents? deaths, seems to have some anger issues and their relationship is inexplicably stilted; his grandfather, the cause of much of the angst, is a bigoted tyrant and Sabine is just, as she admits herself, strange. The looping arcs of the story eventually tie together, but you spend much of the film confused as to why Tom suddenly explodes with rage at a taxi driver over a sandwich; why the grandfather is happy to have his dying moments recorded on his grandson?s mobile phone camera and why on earth Sabine does what she does in the first place.

All this is set to the shrill moan of a violin (Simon?s mother was a violinist ? a fact that has no bearing on the plot other than to justify the soundtrack and allow plenty of soft-focus scenes involving Simon?s parents pawing her instrument), and it gets increasingly high-pitched as the action wears on.

Some good performances, particularly by Speedman as the tortured Tom, and Rachel Blanchard as Simon?s emotionally fragile mother, prevent the film from becoming tedious but there is simply too much going on here for the individual parts to be enjoyed. And its leaning towards artfulness means that some things simply don?t add up. Why, for instance, does Tom not think it suspicious when a woman wearing a burqa knocks on the door and starts quizzing him about religion? And why does Simon feel the need to burn his mobile phone to expunge all trace of his grandfather? Has he not heard of the delete button?

Telling it straight is clearly not Egoyan?s style, but too many dramatic quirks mean that this potentially interesting story lacks the impact it deserves, and instead leaves us with more questions than answers.