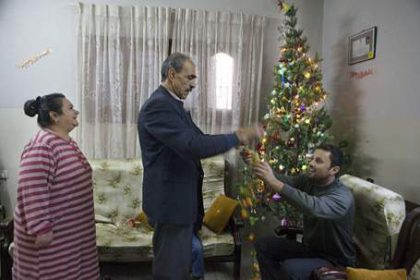 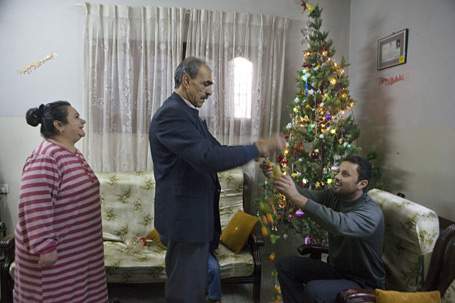 GAZA CITY // Father Jorge Hernandez was busy and distracted. Yesterday was the third day he had spent composing his Christmas sermon, and he hadn?t finished it yet.

?Good intentions are the foundation for hope,? the Latin Catholic priest said his message would be. ?Hope is something we have to pray for in Gaza, where we celebrate Christmas with mixed feelings, remembering the war last year.?

Father Jorge, an Argentinian, was appointed in May to lead Gaza?s small Catholic congregation of a few hundred and was not here during the war. But he can still see, he said, the ?psychological impact?.

?No one did not … know someone who was killed or wounded. And it?s not just the war,? he said. ?The siege affects everyone. I get qualified engineers coming to me to look for employment. There is no work.?

This year, the 3,000-strong Christian community faces severe restrictions on who can leave Gaza for Christmas.

According to Gaza?s Archbishopry, and contrary to Israeli claims that this Christmas hundreds of Gazan Christians would be allowed ?free access? to Bethlehem, the Israeli authorities have decided that just 200 names can be put forward for travel permits. These, in turn, will be granted only to those over 35, an age restriction in place since Hamas won parliamentary elections in 2006.

Laila Elias Ghattas, 62, spent last Christmas with relatives in Nablus in the West Bank, where she ?watched in horror? as the war in Gaza unfolded before her eyes on television.

?My children were all here along with my sister and her children. Every day, I made three phone calls to relatives and friends to make sure everyone was all right.?

The retired English teacher was also shocked at some of the comments she overheard in the West Bank about the war in Gaza.

?Some were saying Gazans have enough children, so it won?t make much of a difference. It was very upsetting.?

This Christmas, she is also hoping to go to the West Bank, the only chance she gets in the year to visit relatives there. But since permits are not granted until a day or two before Christmas, she still did not know if she would be allowed out.

Yesterday she received permission from Gaza?s Hamas authorities to travel. In the meantime, she had decorated her home with a Christmas tree that had been decked out by her Muslim son-in-law, Rawad Abu Tawahin.

?I love the Christmas atmosphere,? said Mr Abu Tawahin, 30, a biology teacher in a government school. ?It?s different from Muslim festivities and still something new to me.?

His marriage to Abeer, Ms Ghattas? daughter, is highly unusual and was fiercely resisted for a long time by both families. The small Christian community in Gaza is particularly worried about women marrying out, since religion traditionally follows the father and Christian numbers are dwindling.

?It took us five years to convince her,? said Abeer, 28, a French teacher, about her mother and her three-year-old marriage.

But even if the Ghattas and Abu Tawahin families have made their peace with the marriage, some in the Christian community still make comments about it to Ms Ghattas.

?Just at the mass yesterday, one of the nuns said I should never have let my daughter marry a Muslim,? said Ms Ghattas, shrugging her shoulders. In general, she said, there was not much mingling between the communities. Hers is the only Christian family in the neighbourhood, and while everyone was civil, she said she had no real relations with the neighbours.

?There?s not much mixing.?

Abeer, meanwhile, said she had noticed changes in Gaza since Hamas had taken power.

?At school, all the female teachers now cover their hair and no one wears make-up. It?s not a law, but it is expected,? she said. Moreover, unlike before, government schools would not be observing a Christmas holiday this year. ?We?re only a small community, so there was never much Christmas here,? said Abeer, who expected to spend the period with her family in their home.

?But everything is harder now,? she added, referring to the blockade. ?No one in Gaza is free.?

Father Jorge, grappling with his sermon, agreed.?We are all in the same boat in Gaza. We can pray for peace. But without justice there can be no peace.?