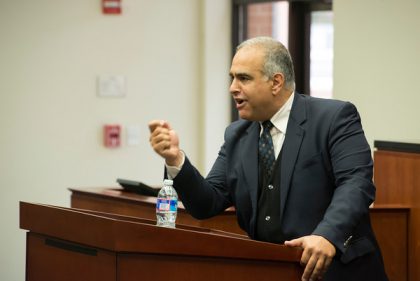 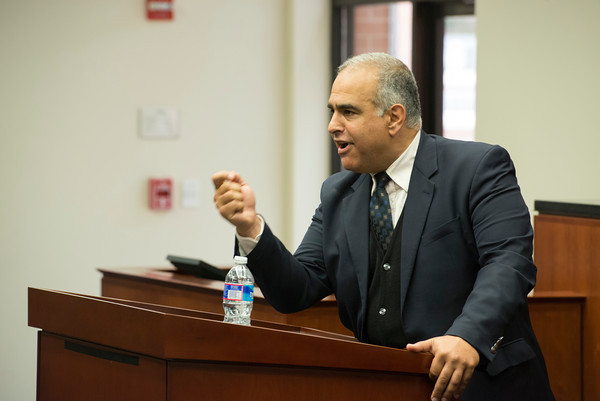 My pursuit of a stronger link with my ancestral homeland brought me to Washington, DC, of all places. Here, on June 3, 2013 I attended a presentation by Armenia's first foreign minister, Raffi Hovannisian, which was well attended by members of the community, regional experts, and diplomats. It was both a pleasure and an honor to attend this lecture, which highlighted the domestic and foreign policy challenges faced by today's Armenia.

A home to a proud and hard-working nation, Armenia struggles on the journey towards democracy. On February 18, 2013, the Serge Sargsyan regime stole the votes of Armenians using ballot stuffing and other fraudulent means, as documented by Policy Forum Armenia (PFA), a virtual think tank centered in Washington, DC. What some foreign observers called “free election”, was neither free nor an election.

“A love so great that we dare to be critical,” was Mr. Hovanissian's message. A graduate of Georgetown Law School and son of a prominent Diaspora family, he challenged Armenian citizens and members of the surrounding diaspora to be critical of the current regime in power. If we truly love our country, we should be critical of the autocratic power robbing the fundamental human right of agency from the citizens of Armenia. The citizens are the most valuable asset of the State, thus their submission to a regime brought to power by illegitimate means is both immoral and in many states, illegal.

According to Mr. Hovanissian, we, the Armenians, have failed the democratic test. Never in our 22 years of experience as an independent nation state has power been transferred via free elections. This puts the Armenian community at a crossroads ? are we able to bring out the best of our values, professional creativity, and intellect to move Armenia towards a democratic state with free elections? From this point onwards, we need to engage Armenians to work together towards change ? a change in regime and a change in the way the country is governed. With positive change, there comes self-respect within the republic, and with self-respect, there comes international respect.

The Armenian people must become more active in the political sphere for change to occur. Mr. Hovanissian outlined a series of steps to direct Armenia away from a corrupted regime and towards democracy. He demanded a comprehensive assessment of civil society in Armenia by the Sargsyan administration. The assessment should be transparent and should give full solutions to the standing issues of Armenia. The assessment of civil society must be twofold. The Sargsyan regime needs to first identify the political and economic problems of Armenia then follow up with a realistic strategy to resolve the identified issues. Once both dimensions are satisfied, the assessment of civil society is complete. In addition, Mr. Hovanissian called upon the Armenian citizens to take action and vote. Those Armenians expressing indifference or removing themselves from participating in this democratic movement are wrong. If society truly wants change, they must seize every available opportunity to make a difference ? no matter how small. Mr. Hovanissian empathized with the frustrations of voting within a corrupt electoral system, but rejected this as a legitimate excuse to abstain.

This past semester, I had the privilege of taking a political science course, which specialized in defining the political spectrum between liberal democracies and closed autocracies. My professor took a series of countries and categorized their regimes along this spectrum. It's hard to explain the frustration of seeing Armenia categorized as a “semi-liberal autocracy.” The negative connotation associated with the label of an “autocracy,” is a damper to much of the progress we believed to be making post independence. Yet, as painful as this may be for us, PFA's latest analysis too confirms this verdict by stating the following in its analysis of 2013 election outcome:

“Our results strongly indicate that the final outcome of February 2013 election was subject to massive manipulations and interference and did not reflect the free will of the Armenian citizens” (Policy Forum Armenia).

The tragedies experienced by the Armenian people throughout history have left us with short-lived experience with statecraft, and we are still on a journey of finding our identity. The 2013 election fraud confirms this challenge. Mr. Hovanissian not only emphasized these issues, but also left the audience questioning ? what can we, as Armenians, do to save our country using a non-violent approach?

“The rest cannot be done in isolation,” according to Mr. Hovanissian, implying that nation building would require a broad-based effort both in Armenia and the Diaspora. Those wishing for change must be critical of the current administration in power and instill hope in the Armenian people that change is possible if enough momentum is built in support of a democratic movement. To withstand challenging before itself, Armenia needs to be well governed and democratic. In the words of Mr. Hovanissian, “Dare to be critical.”