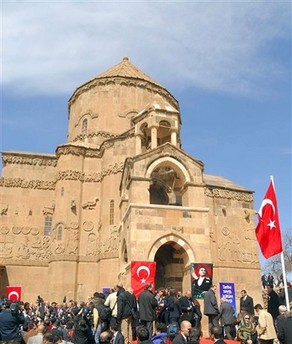 Turkey spoils own attempts of rapprochement

An article by Iris Ludeker in the Dutch Newspaper Trouw on 30 March 2007, featuring reopening of Akhtamar Armenian church by Turkey. Some Dutch newspapers ignored the happening, others, like Trouw, reported in a critical way. Trouw in the same issue published an interview with Etyen Mahcupyan, new Agos director.

The opening of a restored Armenian church in Turkey was supposed to be a sign of reconciliation. It degenerated in a good quarrel.

It could have been such a beautiful rapprochement: Turkish and Armenian high officials together opening a renovated Armenian church on Turkish soil. But what took place yesterday on the small island of Akdamar in the Lake Van in Eastern Turkey was still mainly a Turkish celebration.

Turkish flags and a portrait of Ataturk brightened up the 10th century church. The opening ceremony started with the Turkish national anthem. And despite the presence of a delegation from Armenia the Armenian flag was nowhere to be seen.

The level of the dignitaries was another disappointment. The Turks delegated their Culture Minister, while Armenia was represented by a delegation of 20 persons headed by a Secretary of State.

Turkish Prime Minister Erdogan was supposed to be present, as well as the Armenian Church leader, Catholicos Karekin II. The latter kindly declined the honour and consequently also Erdogan stayed at home.

Karekin cancelled his visit as a mark of protest against the Turkish decision to make a museum out of the restored church. The opening ceremony yesterday was a non-religious one. The Turks also decided to not place a cross on the roof of “the museum”.

The leader of Turkish section of the Armenian orthodox church, patriarch Mesrob II, did come to the event. Mesrob tried to safe the atmosphere by thanking the Turkish government for its efforts. But he also asked to open the church as a place for prayers at least once a year. “If our government agrees with this, it will contribute to peace between the two communities” .

In general the Turkish promotion stunt turned out to be a failure. This as Turks just invested 1.1 million euro to improve the relation with Armenia. The two neighbouring countries have had ice cold relations for decennia and maintain no diplomatic relations.

The borders are closed ever since in 1993 Armenia waged a war with Azerbaidjan an ally of Turkey. The Armenian economy suffered considerably from this war. That is why Armenia said that it welcomes the restoration, but opening of the borders would have been an even better idea. In that case the Armenian delegation leaders would not have had to travel to Van by a roundabout route.

The most painful issue in the relation between the countries is the fact that Turkey denies that in 1915 Genocide has taken place of the Armenian inhabitants of the former Ottoman Empire. According to Armenia 1.5 million people then lost their lives. That the Turkish rapprochement may have been not entirely sincere is proved by the fact that the opening of the church at first was planned for April 24. This is the day, that the Armenian community commemorates the genocide.

The church is ready, Let?s deal with the city now

The church on Akdamar is far from being the only Armenian monument in Turkey. At the extreme east of the country lies Ani, the capital of Armenia in the 10th century, by then already counting 100.000 inhabitants. In the enormous area, right at the border with Armenia, there are tens of rests of churches and mosques. Ani is hard to reach and despite the impressing location few people visit the place. To the anger of Armenians, the Turkish authorities have neglected the matter for years. Just recently, along with Akdamar it has been placed high on the restoration list. Strange enough the Armenian government opened a stone quarry opposite Ani. This destroyed the landscape and affected the restfulness in the area.

More news on this topic at http://www.24april.nl

You can also see and discuss this topic at Holandahay Forum at:
http://forum.nedarm.nl/index.php?showtopic=1152

Photo: The Holy Cross Armenian Church in the Lake Vane (Akhtamar Island) during the opening ceremony, where nationalistic Turkish flags and slogans were raised.