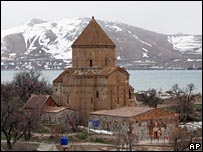 The Turkish government finally carried out last week its much touted but ultimately failed public relations effort for the reopening of the Holy Cross Church on Akhtamar Island . It was a textbook case of how not to carry out a propaganda campaign.

By orchestrating such a high profile show, Ankara intended to impress the international community by trying to make the point that while Armenians are accusing the Turks of having committed genocide against them, the Turkish government was so magnanimous and gracious as to spend $1.5 million of its own money to renovate an ancient Armenian Church.

Due to sheer incompetence and no small degree of malice, Ankara botched just about every aspect of this ceremony. Here is a short list of the many missteps of the Turkish authorities which undermined their own objectives and interests:

1) Changed the date of the opening ceremonies 3 or 4 times, thus making it obvious to the world that Turkey was trying to find the most politically opportunistic time to score the maximum possible propaganda effect.

2) The Turkish Consul General in Los Angeles sent a large number of invitations to Armenians less than two weeks before the “Akdamar” (sic) ceremony. This mailing list was recently acquired from a “moderate” Armenian and the invitations were sent out in cheap brown envelopes, similar to the paper bags used by grocery stores.

3) Leaked to the Turkish media a fake list of the names of Diaspora Armenians who were supposedly attending the reopening ceremony, while in reality, not a single one of them was at Akhtamar.

4) Labeling the Armenians that were invited by Ankara to Akhtamar as “moderates,” served to undermine their credibility and standing in the Armenian community.

5) Forced the Armenian Patriarch of Constantinople to attend the ceremony without allowing him to say even a prayer.

7) Invited high ranking Armenian government officials and then not allowed them to cross the border, thus forcing them to drive 15 hours to get to Lake Van via Georgia, rather than the 4 hours needed directly from Armenia.

9) Rejected the offer from a world famous Armenian-American pianist Shahan Arzruni, formerly of Istanbul, to perform at the opening ceremony on Akhtamar Island . Instead, they arranged for a Turkish pianist who played Turkish, Jewish and Armenian music.

10) Hoisted huge Turkish flags all over Akhtamar Island , including a large one on the church wall itself along with a massive banner of Ataturk.

11) When a couple of pious Armenian visitors lit candles inside the church, Turkish security agents quickly put out all the candles and confiscated them.

12) When Atilla Koc, the Minister of Culture of Turkey, was asked if mass could be held at the renovated Church once a year, he responded by saying that he is waiting for a decision from the Ministry of Foreign Affairs, thus making it perfectly clear that the whole ceremony was a big political charade.

If Turkey wanted to impress international public opinion and win over Armenians everywhere, it should have done the exact opposite of what it actually did. As an Armenian Church leader recently told this writer, if the Turks truly desired to befriend the Armenians, they should have placed crosses all over the Holy Cross Church , instead of Turkish flags and posters of Ataturk. Rather than impressing Armenians, Turkey actually ended up insulting them by desecrating their historic Armenian Church!

Cengiz Candar, in his commentary published in the Turkish Daily News, had very harsh words for the Turkish authorities. He described their actions at Akhtamar as a “disgrace” and even “cultural genocide.”

One can always count on Turkish officials to undermine their own state interests. That is why they are often referred to as “the gang that cannot shoot straight!”