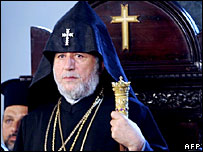 The head of the Armenian Orthodox church is in the middle of a controversial visit to . Karekin II has in the past angered Turks by accusing them of committing genocide against Armenians at the time of World War I. Turkey denies the charges of genocide.

I thought it was a perfectly simple question.

I had gone backstage to interview the conductor of an ethnic Armenian church choir after a rousing performance at .

As the choristers packed up their manuscripts, we chatted for a while about the music and the conductor was all smiles.

Then I asked his opinion on the conference his choir was singing at – the snappily labelled “Symposium on New Approaches to Turkish-Armenian relations”.

I wondered if he thought the event could help mend fences. Within seconds, he was edging away from me, apparently deeply uncomfortable.

“I don't want to talk about politics,” he pleaded, “we just came for the music!”

It was a telling insight.

and are neighbours who might as well be a million miles apart.

Diplomatic relations have been frozen for over a decade; their mutual border is closed.

Part of the reason is 's support for the Azeris in their conflict with .

But the direct dispute is over a matter of history: The death of hundreds of thousands of Armenians in eastern during the dying days of the .

wants those deaths recognised as genocide. refuses to accept that term.

For and its vast and powerful diaspora, getting recognition from is a mission so important, it is almost a way of life. But here inside , ethnic Armenians have chosen an uncomfortable silence over confrontation.

I visited Anush and her brother Vartan in a leafy middle class suburb of .

Their apartment was typical of the area, but with the odd design twists, like knotted dried flowers on the table that reminded me of my trips to the .

“Turks still ask me where I come from,” Vartan told me, as his sister brought in the tea. “They seem to have no idea there used to be hundreds of thousands of us here.”

Anush and Vartan are just two of some 60,000 ethnic Armenians who still live in – a land their ancestors have inhabited for almost 2,000 years. It is an uneasy co-existence.

“We've lived with violence ever since I was born,” Anush told me. “Graffiti on our churches, abuse on the streets. I still think twice in some areas before I say my name openly.”

For previous generations life was even tougher. Anush's parents barely speak Armenian, because their parents worried they would stand out and when Armenian militants began assassinating Turkish diplomats in the 1970s, Turkish Armenian families here made themselves more invisible still.

It is hardly surprising they do not normally voice an opinion on what happened in 1915. 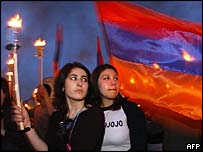 Anush and Vartan are a rare exception and, even so, I have had to change their names.

We know exactly what happened, Vartan told me.

He said his Armenian great grandparents were forcibly deported south, accused of siding with Russian troops against the Turks. They handed their children over to Turkish neighbours for safety and never returned.

There is a similar tragedy behind every Armenian door here, but the local patriarch has banned his community from discussing it – if they want to keep their jobs in Armenian churches and schools.

“It's fear,” Anush told me simply.

There have been some early signs of change here. Last year a university in hosted the first discussion of the genocide claims in ever to question the official line. It was hugely controversial but it happened.

And now international pressure on to re-examine its position is increasing.

Vartan welcomes that but he senses a rise in aggressive, nationalist feeling in in response.

“If other countries force this issue, it will be terrible for the Armenian people here,” Vartan told me quietly.

“If you plunge a man into boiling water, he will burn,” he said, “but if you increase the heat gently, he could get used to it.”

Unlike the Kurds, 's Armenian population is an officially recognised minority with certain rights and privileges.

But despite that – and despite their silence – Turkish Armenians seem like pseudo-citizens.

Anush told me that in one school text book Armenians are still described as separatists with an eye on Turkish land. History books carry the official view of 1915, of course, with the Armenians exiled as traitors.

As we talked into the warm evening, and glasses of tea gave way to Armenian cognac, I began to understand the price people like that choir master pay to live in peace in .

To many Armenians abroad their silence is a sort of treachery. For Anush, Vartan and the others it is about protecting a fragile peace.

But it is all built on the shakiest of foundations.

“I am positive. I do have hopes for ,” Anush told me as I put on my shoes to go.

“But I don't remember ever feeling truly comfortable living here. Always at the back of my mind is the thought that one day I may be forced to leave.”

– Karekin II is in for a seven day visit

– wants to admit the mass killings amounted to genocide