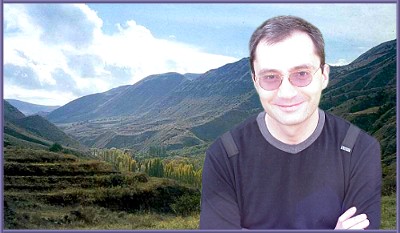 The third Armenian-Diaspora mass media forum with the participation of more than 134 representatives from 15 countries started its work in Tsakkhadzor on September 16, 2006.

Among many speakers was also Armen Ayvazyan, Professor of American University of , Founder and Executive Director of “Ararat” Center for Strategic Research. Below are extracts from his report entitled “Forgotten Guarantees of Armenia-Diaspora Efficient Cooperation” presented to the conference. Armen Ayvazyan calls to make repatriation key goal of Armenians Worldwide.

Today, when the 15th anniversary of 's independence is celebrated and the third Armenia- Diaspora forum starts in , it is time to assess once again the current state and development prospects of Armenia-Diaspora relations.

It should be noted with regret that the ideological, organizational and financial bases for Armenia- Diaspora efficient cooperation have not been created yet.

In the ideological sense, the image of has been turned upside down. is no longer viewed by the Diaspora as the LAST SHELTER AND ONLY HOMELAND of the Armenians spread all over the world. is mostly viewed as a “disaster zone” that should be pitied and financially assisted. The perception and sense of homeland of the Armenians living in their homeland has been also distorted as a result of their upbringing in the Soviet time and those great sufferings they endured during the period of independence, as well as due to the Diaspora's position considering the idea of returning to homeland as unserious. The existence of a large and prosperous Diaspora contributes to emigration, because on the one hand, the Diaspora provides the Armenians living in homeland with a good example of how one can prosper outside Armenia, on the other hand, it makes it easier for them to find a job and get used to new conditions abroad. The Diaspora also gives a psychological self-justification to those who decided to live abroad while retaining elements of patriotism, providing them with a self-deceiving formula that “one can be of more use to homeland from there”.

In reality, longs for not so much financial as moral and psychological support that would be based on pride and respect rather than on pity for homeland. Because the Armenian homeland is not only what is currently visible and tangible but also the history, culture, civilization, dignity and certainly the territory.

The best and most correct way of assisting one's homeland as much as possible is to return to homeland. It was no accident that only 2-3 days after 's unsuccessful operations during the latest war in about 800 Jews went to live in . Since 2000, 13,179 Jews emigrated to from the alone. One of the objectives of such actions is to give the Israelis confidence in the future of their country.

What about us? No such action has been organized by the state or any Diasporan organization, although the war ended 12 years ago.

The problem is not about funds: tens of millions of dollars were obtained for asphalt repairs. The problem is not in the lack of patriotism among the Diasporan Armenians either: there are hundreds and thousands of Diasporan Armenians who would prefer the spiritual aspect to the material one, the hardship and difficulties in homeland to false comforts abroad, educating one's children in the native language to foreign education, and the participation in the Armenians' struggle to inevitable assimilation of future generations. Such people make up a small minority of the Diaspora, but there are thousands of them.

The fact is that the Armenian state and the Diasporan Armenian elite, reject, for various reasons, the very idea of returning to homeland, sometimes even struggling against this idea in a deliberate and persistent way.

The goal (also the major means) of ensuring the existence of the Armenian Diaspora, that is, of preserving the Armenian national identity is to reunite on our own lands under the patronage of the independent statehood, for the time being in today's Armenia (in the territory under control of the Armenian armed forces), in the future – also in historical Armenia's other parts to be liberated.

There is a sense in preserving the national identity only if it helps with the solution of national problems. During this historic period, among such problems are the building and strengthening of the Armenian state, the return to Homeland (“Hayahavak”), and the protection of the violated national rights of the Armenians.

Considering the national identity preservation as a self-purpose (which is done by many Diasporan Armenians) weakens the key elements of the identity preservation. Particularly, the political consciousness of the Armenians is deprived of the opportunity to see the field of the nation's survival and the everyday objective Armenian- Turkish/Azerbaijani struggle there.

Therefore, the organizations of and the Diaspora should do considerable propaganda work among the Armenians with the aim of restoring the weakened idea and sense of homeland and the awareness of the goal of the Armenian national identity preservation. Activities aimed at promoting the idea of returning to homeland should form the pivot of building Armenia- Diaspora relations.

One should eventually realize that human resources are the greatest capital. with its population of three million will not be able to survive long in this difficult geopolitical environment. Today a number of formerly strong Armenian immigrant colonies have no future and break up slowly or maybe rapidly, moving to the US, Russia or Australia. Among such colonies are the Armenian communities of the Middle East and . It is just inadmissible to lose these communities brought up in the Armenian national spirit.

But some developments to make one feel optimistic are worth mentioning. Thousands of Armenians have come to live in on their own free will over the past decade. It means that the process of new hayrenadardzutyun (return to homeland) has started, although at the individual level. Whereas, Armenians should be invited to at the state level and be provided with all comforts. Immigration also brings direct investments in the form of capital and experts.

In the organizational sense, after the collapse of the Soviet Union, no new structures were created in and the Diaspora that would officially deal with problems related to the both grown relations in quantity and quality.

Thus, so far the involvement of the Diaspora in 's life has proceeded in the following ways: 1) assistance programs, 2) lobbying (mainly in the , recently in the European Union), 3) political patronage for certain political groups in .

In order to have progress, the Armenians need to enhance their self-organization both in homeland and in the Diaspora, as well as between them. with its failures and difficulties but also its achievements is the most realistic axis, in many respects – even the only one, around which the Diasporan Armenian life and identity can be built.

In my opinion, it would be useful to consider establishing abroad structures, whose only task will be providing possible assistance to those who return to homeland. These newly established structures should be independent from the other Diasporan structures and the Armenian state.

To summarize, the correct organization of Armenia-Diaspora cooperation envisages serious changes in the ideological and organizational life of the Armenian world (including 's legislative field) based on the idea of the Armenians' unification in sooner or later.

You may reach Dr. Armen Ayvazyan by e-mail at:  [email protected]