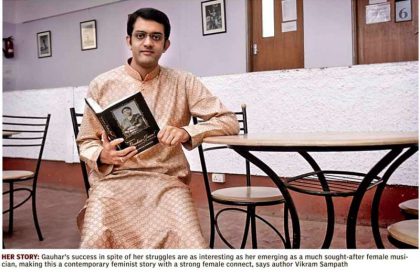 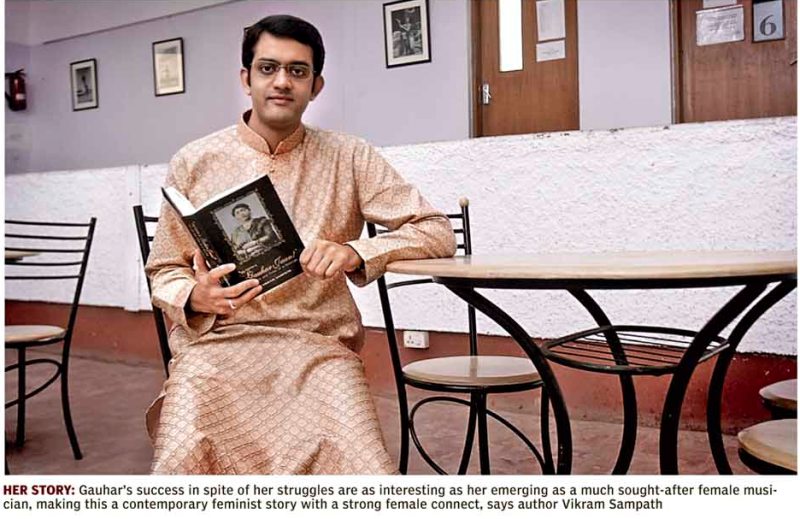 Bangalore: Staring at you from the cover of My Name is Gauhar Jaan! The Life and Times of a Musician is Gauhar Jaan herself. ?Even this picture has a story behind it,? says author Vikram Sampath. ?It is from a picture postcard sent by a British officer to his mother back in England, mentioning how besotted he was with this Indian beauty. Instead of keeping the postcard, his incensed mother chose to give it away. The postcard traveled around and somehow made its way to Switzerland and back to India. And now it is on the cover of this book.?

Gauhar was no ordinary woman. The first Indian classical musician and woman to record on the gramophone at the turn of the 20th century when technology was at its most basic, this feisty Hindustani vocalist from Calcutta adapted to the needs and demands of recording with elan. Today technology may have made recording a breeze, but the book tells us how in that era, artists had to sing very loudly and refrain from making any movements to ensure a good recording.

The book also traces Gauhar Jaan?s life and times as a musician, and for Sampath it was like piecing together a jigsaw puzzle. Bemoaning the lack of documentation of artistes? lives, he says, ?For these people, the music was bigger than the person.? After two years of research, he has collected documents that put to rest myths about her date of birth as well as her lineage ? Gauhar Jaan was born Elieen Angelina Yeoward on June 26 1873 in Azamgarh. Born into an Armenian Christian family, she was six years old when her mother and she converted to Islam.

The book charts the course of her life and tells us how the much-acclaimed and celebrated songstress met a tragic end. In fact, the opening chapter of the book actually depicts her last years as a palace musician at the Mysore Palace and her disgust at finding out that she would receive a sum of Rs500. It presents a picture of an emotionally broken woman, something circumstances and the controversies surrounding her turned Gauhar into.

For Sampath, the journey has been an enjoyable experience. It all started when he was researching his first book Splendours of Royal Mysore: The Untold Story of the Wodeyars. But the author feels several co-incidences finally convinced him to write this book. Interestingly, a few of the experiences were distinctly eerie.

?There was storm-like weather one day when I opened Gauhar Jaan?s archived letters in Mysore, and then again a similar storm brewed in the sky one evening in Calcutta. I felt as if there was a guiding presence,? he says. Talking about the relevance of the book in an age when mp3s rule the roost, Sampath says the history of how technology has evolved to suit musicians is revealing and inspiring.

?That was a time when musicians had to adapt to technology and not the other way round,? he says.

Gauhar?s success in spite of her struggles are as interesting as her emerging as a much sought-after female musician, making this a contemporary feminist story with a strong female connect, says the author.

A student of music who enjoys the research involved in writing non-fiction, Sampath rules out writing any fiction but we could soon have another book on music. ?I want to bring together the gramophone celebrities of north and south India as well as resume another project, that of tracing the Carnatic music scene,? he says.

If he has a wish, it is that Indians learnt the importance of taking care of our cultural legacy. ?Our country must learn how to respect history and document and honour artistes of the past. The business of archiving is vital; there is such rich treasure that is waiting to be lost.?

Comparing the journeys that his two books set him on, Vikram says, ?When I was writing Splendours of Royal Mysore, there was a lot of documentation available. But this time it was a journey into the unknown. I went in to the tunnel without knowing if I would find light at the end of it.?