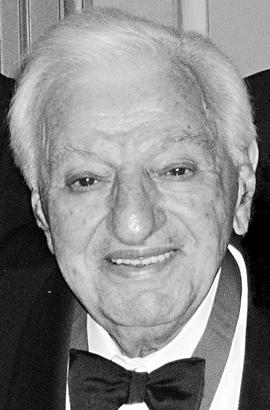 K. Cyrus Melikian, 88, an innovative entrepreneur who made coffee drinking a convenient pastime, died of heart failure Nov. 27, 2008, at home in Haverford.

Mr. Melikian conceived the concept for a coffee vending machine while serving in the Army Air Force at Wright Field in Ohio during World War II. He and an officer, Lloyd K. Rudd, were annoyed that the PX was not serving coffee.

After their discharge in 1946, the men went to work in Mr. Melikian's parents' garage in Mayfair to devise an automatic coffee dispenser. They tested the machine at an Eagles football game, selling coffee for 10 cents a cup. “We couldn't make it fast enough,” Mr. Melikian told an Inquirer reporter.

In the late 1950s, to improve on the instant coffee that Rudd Melikian Inc. used, Mr. Melikian developed a frozen liquid coffee concentrate.

In 1967, he and Rudd sold their company. Mr. Melikian and his sons then established Automatic Brewers & Coffee Devices. At ABCD, Mr. Melikian developed pods for single or double orders of espresso, coffee-pod packaging machines and brewers, and coffee-bean grinders integrated into brewers. His other inventions included a commercial microwave oven and an ice dispenser for soda cups in vending machines. He was responsible for numerous patents, his son Robert said.

Mr. Melikian's parents escaped the 1915 Armenian massacre and immigrated to Philadelphia shortly before he was born. After graduating from Northeast High School, he attended the University of Pennsylvania before serving in the military. Last year, he was interviewed for a PBS special on World War II veterans.

An award-winning marksman, Mr. Melikian helped found the trapshooting program at Aronimink Golf Club. He was a member of several gourmet societies, and was the founder and chairman of the Philadelphia chapter of the International Bacchus Society. In 1961, he and Rudd coauthored The Wonder of Food. In the 1970s, Mr. Melikian wrote a syndicated newspaper feature about the history of famous dishes, and in the 1990s he established and taught at a chef's training school.

He consulted for the Economic Community of West African States and for the Bank of Liberia, and was a partner in a wine importing and distributing company.

In addition to his son, he is survived by his wife of 63 years, Roxie Bozoian Melikian; daughters Karen Harrison and Michele Lockwood; and six grandchildren. A son, K. Cyrus Jr., died in 1979.