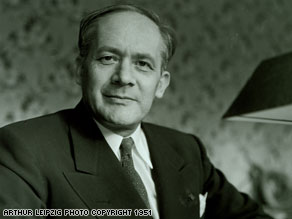 (CNN) — Paris, 1948. In the shadow of the Holocaust, the fledgling United Nations meets to adopt one of its first human rights treaties.

It was, at last, a victory for a tireless crusader who had fought for his entire life against genocide — and coined the term that describes the world's most heinous crime.

“This new official world made a solemn pledge to preserve the life of the peoples and races of mankind,” Lemkin later wrote.

Sixty years ago this month, the U.N. voted unanimously to adopt the Convention on the Prevention and Punishment of the Crime of Genocide. It was ambitious, serious, far-reaching — and largely the result of Lemkin's lifetime of effort.

A Pole and a Jew, Lemkin had watched in horror as Hitler nearly succeeded in his plan to exterminate the Jews. Six million Jews — including 40 members of Lemkin's family — died at the hands of the Nazis.

Today, we call what happened at Auschwitz and the other death camps “genocide.” But at the time, there was no name for the Nazis' crimes. The word “genocide” did not exist.

In 1944, Lemkin wrote a book about the Nazis. In it, he combined the Greek “genos” for race with the Latin “-cide” for killing: Genocide. Lemkin had named the crime he spent a lifetime trying to prevent.

As a child in Poland, Lemkin was inspired by the stories his mother told him at the fireside — stories of history and heroism, of suffering and struggle. As a Jew he witnessed cruelty and persecution firsthand: from the bribes his parents were forced to pay, to a pogrom that killed dozens nearby.

From his mother, and from his circumstance, Lemkin developed early a strong desire to better the world and protect the innocent and the weak.

“The appeal for the protection of the innocent from destruction set a chain reaction in my mind,” Lemkin later wrote. “It followed me all my life.”

As a teen, Lemkin learned through news accounts that the Turkish government was slaughtering its Christian Armenian citizens. The government claimed it was putting down an Armenian revolt. Over 8 years they killed a million Armenian men, women and children in massacres and forced marches. To this day, Turkey denies a genocide took place. Few of the perpetrators ever faced justice.

Lemkin didn't have an answer to the question. But, as a young man, he devised a bold plan. He would write an international law that would punish — and prevent — racial mass murder.

By October 1933, Lemkin was an influential Warsaw lawyer, well-connected and versed in international law. At the same time, Hitler was gathering power. Lemkin knew it was time to act.

He crafted his proposal making the destruction of national, racial and religious groups an international crime and sent it to an influential international conference. But his legal remedy found little support, even as anti-Semitism was becoming Germany's national policy. When Hitler invaded Poland in 1939, Lemkin knew his worst fears were about to be realized.

“Hitler had already promulgated … his blueprint for destruction,” Lemkin wrote. “Many people thought he was bragging, but I believed that he would carry out his program.”

Lemkin fled Warsaw with only a shaving kit and summer coat. He survived months in the forest, traveling furtively, dodging falling bombs and fighting for the Polish resistance.

He managed to reach his parents one last time — only to say goodbye.

“Do not talk of our leaving this warm home. We will have to suffer, but we will survive somehow,” Lemkin said his parents told him. “When their eyes became sad with understanding, I laughed away our agonizing thoughts, but I felt I would never see them again. It was like going to their funerals while they were still alive.”

Reluctantly, Lemkin left his family to their fate and became one of the lucky few to reach the United States, where a friend arranged a job at Duke Law School. Though now safe, Lemkin remained anxious.

“I had not stopped worrying about the people in Poland. When would the hour of execution come? Would this blind world only then see it, when it would be too late?”

Troubling letters arrived from home. His father said they were surviving on potato peels and nothing else. His mother assured him, “What counts is that we are all together, alive and healthy.”

“Something … told me they were saying goodbye,” Lemkin later wrote, “in spite of my parents' effort not to alarm me.”

By 1942, the U.S. had entered the war, and the Germans had accelerated their deadly work. Concentration camps ran day and night, like assembly lines. At Auschwitz, more than a million perished.

Even though word of the slaughter was reaching America, it seemed of little interest to the press and politicians. Lemkin was outraged.

“The impression of a tremendous conspiracy of silence poisoned the air,” he wrote. “A double murder was taking place. … It was the murder of the truth.”

Lemkin tried everything he could to stop the killing, even writing to President Roosevelt.

“Patience,” Lemkin wrote. “But I could bitterly see only the faces of the millions awaiting death. … All over Europe the Nazis were writing the book of death with the blood of my brethren.”

Jewish groups pressed Washington to bomb the camps or rail lines. The Americans refused. Although Allied planes took photos of Auschwitz in 1944 as they scouted nearby targets, the U.S. didn't want to divert military resources from winning the war.

Frustrated, Lemkin decided to take a different tack. He would use the Nazis' own words to prove their depravity.

Taking hundreds of pages of Nazi laws and decrees, Lemkin wrote a comprehensive book that laid bare the Nazis' brutal plans. And he invented a word for the crime the Nazis were committing. Genocide.

With the crime named, he hoped the world could no longer turn away. But no help came.

Even the Nuremberg trials were a grave disappointment for Lemkin. They did little to codify genocide as an international crime — and did nothing to prevent it from happening again.

But Lemkin knew he must keep trying. He revived his 1933 proposal and set his sights on the fledgling United Nations. He hoped this new world body, born out of the ashes of World War II, could create and enforce an international law against genocide.

Lemkin put everything aside and made the passage of a genocide convention the focus of his life. He wrote and rewrote the text of the convention, lobbied delegates, wrote to leaders worldwide in their own languages — Lemkin was fluent in more than 10 — to gather support.

On December 9, 1948, the U.N. met in Paris and voted unanimously to adopt the Genocide Convention.

Days later, Lemkin fell gravely ill and was hospitalized. For nearly three weeks, the doctors struggled with a diagnosis. Lemkin finally offered one himself: “Genociditis,” he said, “exhaustion from working on the Genocide Convention.”

A decade later, Lemkin would die from a fatal heart attack, penniless and alone, having given his life to the fight against genocide.