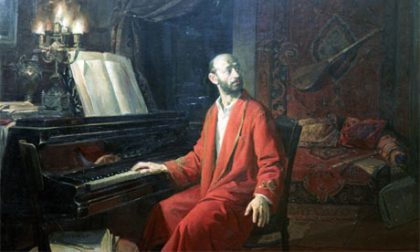 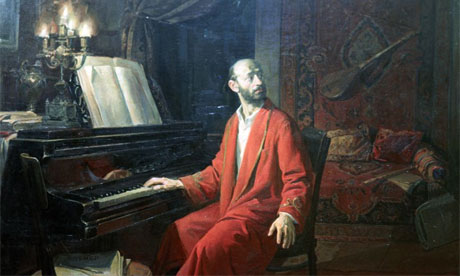 Composer Komitas Vardapet survived a genocide and somehow bridged Armenia and Turkey's musical divide. He should be better known

Sunday 24 April is Easter Day, but for Armenians it is also genocide remembrance day. This is when Armenians all over the world will gather to commemorate the anniversary of the 1915 genocide in which 1.5 million Armenians in Turkey were either slaughtered, or died on forced marches into exile. For Armenians, music is memory. And whenever they gather to honour their dead, the songs they sing are by the composer who speaks for the soul of their nation, Komitas Vardapet. He himself was a victim of the 1915 persecution, and though he survived physically, he was driven into madness by it. Outside Armenia he, too, has been swept under the carpet of history.

Komitas's output was modest: 80 choral works and songs, arrangements of the Armenian mass, and some dances for piano. But as his better-known compatriot Aram Khachaturian acknowledged, he singlehandedly laid the foundations for Armenia's classical tradition. And as a collector and arranger of folksongs, he did for Armenia what Bart?k did for Hungary, turning simple material into bewitchingly sophisticated polyphony. After a Komitas concert in Paris, Claude Debussy declared that on the basis of a single song, he deserved to be recognised as a great composer. Yet many classical musicians barely recognise his name.

I first became aware of Komitas's existence when recording the Armenian Chamber Choir in Yerevan in 2001. I was intrigued by the songs' vibrant strangeness: folk melodies so deftly arranged that the raw beauty of the originals glowed the more brightly.

Soghomon Soghomonyan ? his original name ? was born in 1869 to Armenian parents in Turkey, where the Christian minority endured routine discrimination. His parents (who both died when he was young) were noted singers: he inherited their gift and was talent-spotted at 12 by an Armenian bishop, and enrolled at the Etchmiadzin seminary near Yerevan. There, he was the class comedian who could mimic the songs he found in villages on the slopes of Mount Ararat: even in his teens he was a pioneer ethnomusicologist. Using the notation he had learned in the Armenian liturgy, he wrote down what he heard, devised three-part arrangements, and formed a student choir to sing them.

Soghomonyan's appetite for songs was voracious ? one day, he noted with pride, he collected 34. His account of the ploughing song he found in the Armenian village of Lori reflects a remarkable ear: in his transcription, music, movement, and complex social relationships are seamlessly interwoven. In another village, he observed a girl singing to her dead mother: her plangently disordered song, he wrote, “expresses the sadness of her lot, and her inner world. If other orphans had heard it, they would have joined in. But after a while, that song would be forgotten. Because for the peasant, creating a song is as ordinary and natural as casual conversation is for the rest of us.” As an encapsulation of the essence of folk music, this could still not be bettered.

Meanwhile he was trying to crack the code of “neume” notation, denoting changes of pitch, used in Armenian liturgical chants in the early middle ages. Altered in oral transmission over the centuries, Soghomonyan was determined to rediscover their original form.

At 25, Soghomonyan was ordained a Vardapet ? a celibate priest ? and renamed himself Komitas after a seventh-century religious poet. But Etchmiadzin was a small world, and he needed to spread his wings. He went to study in Berlin, then moved to Paris, where he founded a choir and began to attract big audiences for his folksong recitals. Regarded as the musical voice of Armenia, he was now a European celebrity, but his secular performances of sacred Armenian music put him on a collision course with his church. He also courted trouble through his relationship with Armenian singer Margaret Babayan, with whom he snatched an improbable holiday on the Isle of Wight. It will never be known if they had a love affair, but his letters suggest as anguished a wrestle with his soul as over his never-ending battle with the church traditionalists. He was at once a sensualist and an ascetic: he wanted to submit to discipline, but couldn't deny his artistic calling.

Komitas went on to found expatriate Armenian choirs in Alexandria and Constantinople, where even Turks began to celebrate him. This was grimly ironic, for in 1913, when Komitas and a group of fellow intellectuals were embarking on an oral-history project to celebrate the Armenian community in Turkey, Turkish Muslims were encouraged by politically insecure rulers to loot Christian Armenian villages and murder the inhabitants. Turkey's Armenians were ghettoised, disarmed (even of kitchen knives), and finally, on 24 April 1915, deported en masse. Komitas was among 291 prominent figures trucked off into the mountains. When the secret police came for him, he submitted to his arrest with a Kafkaesque fatalism.

The rest of his story has terrible pathos. At first he was the comforter of his friends as they were shunted from one town to another, with word filtering out that they were destined to be shot. One day he was brutalised by a guard, and something in him snapped: from that point on, though he was among the few who were reprieved (after intervention by the American ambassador, one of his fans) he retreated into a paranoid world, spending his remaining 20 years in an asylum.

Post-traumatic stress disorder was clearly the trigger for Komitas's breakdown, but his biographer, Rita Soulahian Kuyumjian, argues that its real roots lay in his doomed struggle to “preserve” his dead parents through the songs they sang, and to do the same for two ecclesiastical father figures by cracking the code of the neumes. Dr Vrej Nersessian, priest at the St Yeghiche Armenian church in Kensington, agrees: “Komitas's real tragedy was the loss of his research. His will was broken.” In Nersessian's view, it would be an insult to Komitas's memory if he were consigned, as he often is, to a box marked “Armenian genocide victims”.

Komitas claimed to have cracked the code of the neumes, but his key is lost. Scholars still search for what could open a fascinating window on remote musical history. Meanwhile, by refusing to recognise any divide between the folk musics of Turkey and Armenia, Komitas showed a way in which the antagonism between the two could be dissolved. But his choral works are his monument.

Armenia's leading composer, Tigran Mansurian, recently wrote a cello concerto with the richly symbolic title, Where Is Your Brother Abel? As a child of Armenian genocide survivors, Mansurian is still pursuing closure, and his guide in this pursuit is Komitas. “His garden of sounds,” says Mansurian, “covers a vast territory in time, stretching across millennia.” But where, in the garden of western classical music, is Komitas?