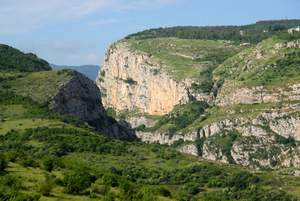 The taxi weaves along twisting roads that cling to the mountainside as we drive into Nagorno-Karabakh. On all sides, the heavily wooded hills in the unspoilt valley are a rich dark green in the summer sunshine. As we stop for a few moments to enjoy the views, however, a more sinister picture emerges.

Draped from one side of the valley to the other is a long wire, from which every few metres, lengths of wire hang down at right angles.

The device is here to prevent Azeri aeroplanes from flying low, and it is an early reminder that, for all of Nagorno-Karabakh?s beauty, it has a turbulent recent past.

Between 1988 and 1994 Armenians and Azeris fought a war over this enclave, which had been an Armenian-majority region within Azerbaijan.

As the Soviet Union broke up, the Armenian population asserted their desire to become independent, unhappy that, in their view, the Azerbaijani authorities were trying to increase the numbers of Azeris in the enclave.

After a bloody conflict that claimed 30,000 lives, the Armenians, helped by the military of Armenia itself, retained control of the enclave despite the efforts of Azeri forces.

Fifteen years on from the ceasefire, there is still no formal peace deal and Nagorno-Karabakh?s declaration of independence remains unrecognised. But the enclave is largely quiet, despite the occasional skirmish, and is safe for tourists.

My own interest in this out of the way place stems from a holiday to Armenia during a previous year, and hazy memories of television news reports about the conflict from the early 1990s. To what extent, I wonder, has it recovered?

When we stop to admire the scenery, my taxi is half-way through the five-hour trip from the Armenian capital, Yerevan. Minibuses ply the same route.

My route, which early on offers fine views of Mount Ararat, the mountain in modern-day Turkey that Armenians consider their spiritual home, is the only way in. The borders with Azerbaijan are still a front line where opposing troops face one another.

Before heading off, I obtain a Nagorno-Karabakh visa from the enclave?s permanent office in Yerevan. After that, getting in is straightforward and we are only kept a few minutes at the border.

Our destination is Stepanakert, the de facto republic?s leafy and hilly capital, which resembles any attractive provincial town in eastern Europe. With its relaxed streets with locally owned clothes shops, young mothers pushing prams and elderly people sitting about chatting in the sunshine, it certainly does not feel like a conflict zone.

In fact, if you spent a few hours in this city you would never believe that Armenia and Azerbaijan are still technically at war over the land.

Stepanakert has such a relaxed air that even the few soldiers walking through the streets are happy to be photographed with visitors.

There are street cafes by the dozen and an attractive main square where the new national assembly building ? bizarrely attached to one of Stepanakert?s several new hotels ? has been built.

In contrast to the tense situation in some other countries in the region such as Armenia, in Nagorno-Karabakh tourists can approach the assembly building and take as many pictures as they like.

Perhaps officials are accommodating because tourism is one of Nagorno-Karabakh?s few income generators, alongside wine production. The enclave remains heavily dependent on outside benefactors, including Armenia itself and diasporan Armenians.

?Tourism is one of the most important industries for the economy,? Ashot Ghoulian, the national assembly chairman, says. ?We have beautiful nature and historical monuments and the numbers who come increase year by year.

?The only thing tourism lacks in Karabakh is the development of infrastructure. We have a lot to do in this direction.?

In total, 5,367 tourists from outside the Commonwealth of Independent States, the former Soviet nations, visited Nagorno-Karabakh last year, according to figures from the enclave?s Ministry of Foreign Affairs. This was up 11 per cent on 2007.

Most tourists are from Armenia, or are diasporan Armenians, many of whom visit in groups travelling by coach from Yerevan.

Among the recent visitors is Nadia Kurkdjian, a secretary born in 1954 in Yerevan but brought up in France from the age of 11.

?Karabakh is the old land of Armenians,? she said. ?It?s interesting, because after the war we want to know what happened here.

?This is my third visit. My first visit was 10 years ago and then the city [Stepanakert] was very, very bad. Now we can see everything is going better and we?re very optimistic for the country. In the small villages, it?s wonderful.?

After enjoying Stepanakert, I head back to my homestay, which cost just 5,000 Armenian dram (US$14; Dh50) per person, per night. My host is a friendly widow who makes me cups of coffee and gives me sweets, although communication is difficult. Indeed English is not widely spoken in Nagorno-Karabakh, and that includes taxi drivers, but visitors should be able to find a place to stay if they persevere.

Travelling out of Stepanakert the next day to explore the countryside, my taxi stops by a hill that hosts the symbol of Nagorno-Karabakh, a sculpture of the head of an old man and an old woman.

With its heavy looks and straight edges, the ?We Are Our Mountains? sculpture is typical of the enclave?s stark and uncompromising Soviet-style monuments.

Our lumbering, Russian-built Volga taxi struggles up the hills as we head for Shusha, known in Nagorno-Karabakh as Shushi. In 1920 most of the Armenian residents were killed or driven from their homes, so during the conflict it was an Azeri stronghold and the source of many of the shells that landed on Stepanakert. Now, with the tens of thousands of Azeri residents having been killed or fled, it has an estimated population of just 4,000 Armenians.

In the wet weather when I visit, it is a depressing place with a haunted look. Amid the countless broken shells, there are attractions, however, such as the late 19th-century Ghazanchetsots Cathedral.

After 1920, the historic building was not used as a place of worship, but following the more recent conflict, it was renovated and with its white limestone facade and beautifully carved wooden door, it now stands in contrast to some of the city?s unrepaired and abandoned buildings.

Although the Azeris have left, fortunately much of Shusha?s Muslim heritage has survived, including a mosque with a damaged minaret with a beautiful pattern of red, brown and white bricks.

On another day, the sun shining brightly, I travel south from Stepanakert through rolling green hills of grass and trees, dotted occasionally with villages and the long, mostly disused buildings of the old Soviet collective farms.

It is hard to imagine a more attractive setting than the one that greets me when I stepped outside near the village of Amaras: fruit trees, vineyards and grassland. Butterflies flutter in the flowers and the only sound is birdsong.

Indeed, so much of Nagorno-Karabakh is, at least in appearance, an unspoilt rural idyll of green valleys, many heavily forested. It is not unlike parts of Armenia or Georgia I have been to, only without the ugly Soviet industrial plants that scar the landscape elsewhere.

Up on the hill ahead however are the remains of a tank, another reminder of Nagorno-Karabakh?s past. Tourists should bear this history in mind when they explore Nagorno-Karabakh, as many areas have not been cleared of mines and other unexploded material, so venturing off the beaten track can be extremely dangerous.

Amaras has a beautiful monastery opened for me by a young boy who lives with his father in a nearby outbuilding. The father limps as a result of a mine injury.

Amaras Monastery has an important place in Armenian history, since it is here that St Mesrob Mashtots created the first of several schools that used the Armenian script he invented early in the fifth century.

Although the gardens around the monastery are overgrown, the simple white interior is well kept and elegant. For sale on a table are small stones, each painted with a different letter in the Armenian script that St Mesrob Mashtots invented.

While many of Nagorno-Karabakh?s attractions draw people in for their natural beauty, visitors sometimes try to go to the city of Agdam in the enclave?s east for the opposite reason. This former Azeri city, where the mosque is said to be one of the few largely undamaged structures, is described as a post-apocalyptic nightmare of ruined buildings and empty streets. Entry is forbidden, although intrepid tourists sometimes attempt a visit.

My taxi takes me through yellow-brown fields after leaving Stepanakert, and skirts Agdam?s sides. From here the view is chilling enough: row upon row of wrecked empty buildings, with just one or two people tending cattle amid what was otherwise a ghost town. Nagorno-Karabakh is a rare mix of beauty and ugliness, and all the more fascinating as a result.

Photo: From Nagorno-Karabakh by Onnik Krikorian.